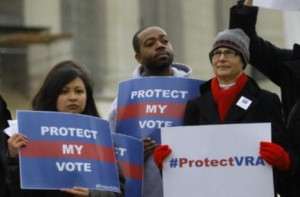 The National Association and its partner organizations need your help in urging Congress to pass legislation to fix the Voting Rights Act.

The U.S. Supreme Court last June declared the Voting Rights Act is unconstitutional when it came to identifying jurisdictions that must get “pre-clearance,” or federal approval to change voting laws. Pre-clearance enabled the federal government to prevent states and local  jurisdictions from enacting laws that could make it more for the elderly, minorities, women and other vulnerable groups to cast a ballot.

While there is bipartisan support for the bill in the House and from Democratic and Republican leadership there are still not enough co-sponsors for the legislation. So passage is not guaranteed. In fact, Voter Rights Fix Coalition members say they are not receiving a significant amount of constituent phone calls or letters calling for passage of the bill.

There still needs to be a great deal of outreach in the form of phone calls, letters or visits to members of Congress in your jurisdiction to pass this important legislation. Without constituent pressure, congressmen are not likely to speak out in favor of the bill.

Voting rights is  important issue for social workers, who have long fought for equal rights for all. Whitney M. Young, Jr., one of the country’s key civil rights leaders who fought for, and eventually won passage of the Voters Rights Act of 1965,  served as NASW President from 1969 to 1971. We hope you honor the legacy of Young and other social workers by getting involved in the push to restore voting rights.