Recently, the Religious Freedom Restoration Act (RFRA) was signed into law in Indiana. Following its passage, there has been a strong and immediate reaction regarding its potential use and the message it sends about our state’s values at a national level. A vast array of businesses, academic institutions, religious groups and human rights advocates have stated their opposition to RFRA on the grounds that this law has the potential to lead to the further disenfranchisement and outright discrimination of specific populations. NASW Indiana has stood with this opposition as RFRA moved through our statehouse, and we continue to do so now. We strongly feel that RFRA does not benefit our state, nor does it uphold the values of the social work profession.

First, let us make clear our stance on protecting religious freedom. The citizens of our state and members of the social work community, are all parts of an intricate fabric of deeply held religious, spiritual and personal beliefs. These beliefs are often the leading influences in our lives, and add depth and beauty to our communities. For those engaged in human services work, they are frequently the driving force that allows us to persevere in our efforts. Further, positive expressions of religious faith, spirituality and other personal beliefs are something that the social work community has always sought to protect. We do this both in respect of individual freedom and in our efforts to assist diverse groups that might otherwise face inequality and marginalization.

In fact, our initial response to the Religious Freedom Restoration Act was to open discussions with religious leaders and faith-based entities that we had forged relationships with, in order to be absolutely sure that we were not responding without a knowledge of the impact that this law might have on them. If this bill aided them in their ability to positively express their faith and often-related cultural heritage without fostering the intent or ability to harm others, our stance would have been moderated to reflect that reality. Sadly though, this was not our finding in those dialogues. 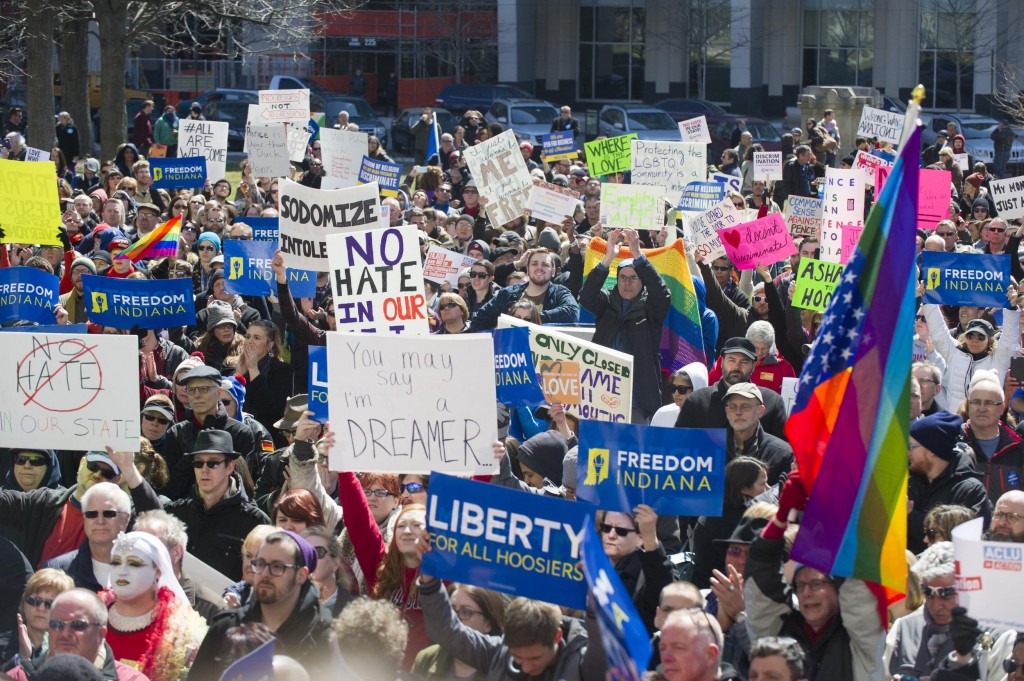 Passage of the Religious Freedom Restoration Act has sparked protests in Indiana and boycotts around the nation.

Many faith-based and religious groups, actually, were much more worried about how they might face discrimination due to their beliefs and practices, contrary to the stated intent of the law. Often, the histories of many of these groups were fraught with such examples discrimination, harsh enough that they still fear they could be repeated. Herein lays the crux of our examination of RFRA. We must ask the fundamental question of does the law allow for a greater, unimpeded and positive expression of beliefs, or does it rather allow for the invoking of a religious belief to be used as a guise for the practice discrimination and harm toward others.

We must also ask how this law impacts those who do not have the ability to invoke religion as legal defense, but should still have their freedoms protected. There is a simple reality that those persons described above may not have equal protection in Indiana with the passage of RFRA. This would be most specifically true of the LGBT community, as they are not a legally protected class in our state while classes such as race, gender, disability and religion are defined as such. Indeed, even in those municipalities that have put local protections in place for the LGBT community, RFRA may take precedent and effectively invalidate them. Even if RFRA proves itself to only be enacted in cases related to a governmental interest, as is suggested by supporters of its current form, it would continue to allow for this imbalance in equal protection. Those enacting religion may have a greater legal recourse than those seeking to defend their selves for non-religious reasons.

We strongly feel that RFRA does not benefit our state, nor does it uphold the values of the social work profession.

Allowing additional protections to one group while another group is not afforded the same protections under law seems to be the very definition of a discriminatory legal standard. Again, we would like to assume this will not be the case in practice. Certain adjustments have been made to RFRA that we hope will limit the law to being used in such a manner, at least in cases between individuals. Unfortunately, there will remain great uncertainty for those potentially affected until case law precedent is established, leaving those unprotected persons doubtful of their futures during the time it takes to do so. The potential for increases in anxiety, depression and stress related health conditions in groups that feel marginalized or at risk for discrimination is well-documented, and will doubtless occur in the case those left unprotected by the passage of RFRA.

Even if this law is proven to only affect cases in which there is potential for government involvement, there are troubling possibilities that have already surfaced in states with similar laws. This has included cases in areas such as child abuse, domestic violence, child labor law violations and child safety in child care facilities. In each case, the defense for harmful actions taken was that they related to the practice of a deeply held religious belief. Even when decided in favor of the state’s interests, delays in ensuring the safety of others occurred.

Again, we would like to believe that this law has the best of intentions, as its proponents continue to state and as its title publically suggests. Many groups have worked steadfastly to help RFRA become a positive force in our state, allowing it to promote a positive, free and open expression of our individual beliefs. Despite small changes made at the statehouse before its passage, and likely clarifications to be made on its intentions moving forward, we cannot simply hope for this to be the case as RFRA is implemented. Indeed, it has been directly stated that leadership does not wish to fundamentally change the law. And sadly, for those believing this law grants the right for harmful discrimination under the pretense of religious belief, we may never know how many may fall victim that will choose to not make such instances of discrimination public or to address them legally.

Make no mistake, our response is not meant to be construed as a political one. We work diligently with our legislators on both sides of the aisle, and have allies on all sides that have helped to craft and pass tremendously valuable legislation that will help all in Indiana to reach their fullest potential. We applaud our legislators for these types of actions, and will continue to work on such efforts with respect for all involved.

Neither do not seek to be alarmist, but cannot choose to ignore any legislation that has a risk of creating an environment of intolerance, inequality or discrimination. When our own public leaders have difficulty directly answering questions about the potential for the Religious Freedom Restoration Act to foster discrimination, such concern seems all the more warranted. A clear and unequivocal statement is needed in this regard from our state’s leaders, one made not due to political pressure but instead out of respect for the true values of our state and its populace. We sincerely hope that any oversight has been unintentional and will soon be remedied.

As leaders in the social work and human services fields, the NASW Indiana Chapter can only make a statement on our own behalf now, although we know that countless others join us in our sentiments. Discrimination and the intentional harm of others cannot be tolerated in Indiana or elsewhere, and we will continue to stand unwavering to ensure equality and fairness for all now and into the future.

For more on Social Work values read the NASW Code of Ethics.   And to learn NASW’s policy positions on various issues, including community development, civil liberties and justice and the treatment of people who are lesbian, gay, bisexual or transgender, read Social Work Speaks 10th Edition.