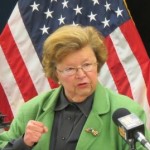 Sen. Barbara Mikulski (D-MD) on March 2 announced she will not seek reelection and will retire in 2016. The National Association of Social Workers (NASW) thanks Mikulski for her 38 years of leadership in Congress and for her strong and unwavering support of the social work profession and issues important to social workers.

With almost two years remaining before her final term ends, NASW stands ready to work with Senator Mikulski in her efforts to enact legislation that benefits American families and communities.

During her remarkable career, she has used her social work skills and values to champion issues that promote the well-being of our society – especially those most in need.  Mikulski began her career as a Baltimore social worker and is a longtime NASW member. She has also been a sponsor of the Dorothy I. height and Whitney M. Young, Jr. Social Work Reinvestment Act, which seeks to secure federal and state investments in professional social work to enhance societal well-being.

Mikulski is also a member of the Congressional Social Work Caucus and was a 2013 recipient of the NASW Foundation International Rhoda G. Sarnat Award, which is awarded to individuals, groups or organizations that have advanced the image of the social work profession.

She is a role model to generations of social workers and has lived up to the ideals of our profession by showing a willingness to work with members of all parties and people from all walks of life to pass legislation that improves the lives of millions.