Tips for Social Workers: Resources for sexual assault survivors in the military

The organization partnered with the National Association of Social Workers (NASW) during its 2014 National Conference Film Festival to provide social workers with information on addressing clients who were sexually assaulted while in the military during the screening of the documentary “Justice Denied.” “Justice Denied,” which was co-directed and co-produced by National Association of Social Workers member Geri Lynn Weinstein-Matthews, MSW, LICSW, looks at the sexual abuse of males in the military.

April is Sexual Assault Awareness and Prevention Month and RAINN wanted to provide social workers with information on resources that could help clients who are victims of such crimes: 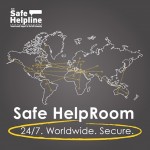 April is Sexual Assault Awareness and Prevention Month (#SAAPM on Twitter) and with the heightened attention on this issue, there’s no better time to learn more about the resources out there to support the survivors you work with.

DoD Safe Helpline is a crisis support service specifically designed for members of the military community and their families affected by sexual assault. Two of Safe Helpline’s services, The Safe HelpRoom and the Self-Care App, move beyond crisis intervention to further support survivors as they begin working with you, through counseling and long-term support programs.

Safe HelpRoom is an anonymous group chat service, available 24/7, which allows survivors to support one another in a safe online environment. It was created to address the unique needs of sexual assault survivors in the military, who may feel particularly isolated due to frequent deployments and the life/work situation on base. It aims to allow survivors to connect and chat with each other while maintaining user anonymity and confidentiality.

Take a tour of Safe HelpRoom. 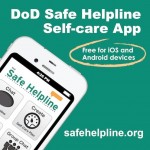 Designed to supplement on-going counseling programs, the self-care plan results are saved on the App and can be used by the survivor to identify trends in his or her recovery. The App also allows users to access all of the other Safe Helpline services (Telephone Helpline, Online Helpline, Safe HelpRoom, and the sexual assault support services resource database) quickly and easily through a mobile friendly platform.

Download the Self-Care App on your Apple or Android mobile device for free.

To learn more about supporting survivors of sexual assault in the military and the resources available to them visit https://safehelpline.org/ or email Safe Helpline at outreach@safehelpline.orh.

Department of Defense (DoD) Safe Helpline provides confidential crisis support and information for members of the DoD community affected by sexual assault. You can get the help you deserve — while remaining anonymous. Safe Helpline services are provided by the DoD Sexual Assault Prevention and Response Office (SAPRO) and are operated through a contract by the Rape, Abuse & Incest National Network (RAINN), the nation’s largest anti-sexual violence organization.