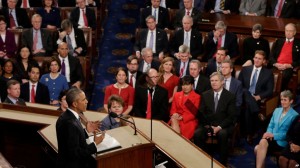 Image courtesy of Voice of America.

President Obama made his final State of the Union Address  on January 12. Given the historic nature of his presidency, this was a much anticipated speech.

For many, the end of the presidency of America’s first black president is met with both a sense of reflection about the last  seven years and anticipation about his priorities for the remaining 12 months.

The National Association of Social Workers (NASW) is encouraged  Obama made a concerted effort to mention and to champion several social justice and economic equity that are important to this association.

For example, NASW and its membership have vocally expressed deep concerns about the level of gun violence that has plagued our nation during the past decade. Not only did the President pledge to continue to seek ways to regulate the sale of weapons, he directly admonished gun associations and merchants that have opposed any legislation or regulations that would limit access to firearms.

Similarly, Obama recommitted his administration to move forward on criminal justice reforms. He specifically voiced support for the bipartisan Sentencing Reform and Corrections Act of 2015 which, if passed, will be a major step toward what we hope is the precursor of additional criminal justice and juvenile justice reform legislation.

NASW is also pleased  the President spoke forcefully about creating a level playing field for fair elections in the United States when he said:

But I can’t do these things on my own. Changes in our political process — in not just who gets elected, but how they get elected — that will only happen when the American people demand it. It depends on you. That’s what’s meant by a government of, by, and for the people. …those with money and power will gain greater control over the decisions that could send a young soldier to war, or allow another economic disaster, or roll back the equal rights and voting rights that generations of Americans have fought, even died, to secure. And then, as frustration grows, there will be voices urging us to fall back into our respective tribes, to scapegoat fellow citizens who don’t look like us, or pray like us, or vote like we do, or share the same background.

These words directly challenged the practices of gerrymandering, voter suppression, and unlimited “dark money” in political campaigns that ensure that a small group of rich and powerful Americans will determine who will represent majority. As an organization that has long stood for the total enfranchisement of every American, especially those who live on the margins of our society, we believe the president’s phrasing of this issue was timely and poignant.

NASW supports Obama’s social justice and economic justice agenda. We are pleased to hear him say he will not be a lame-duck president for the next year, and will continue to work hard to achieving unfinished business such as comprehensive immigration reform.