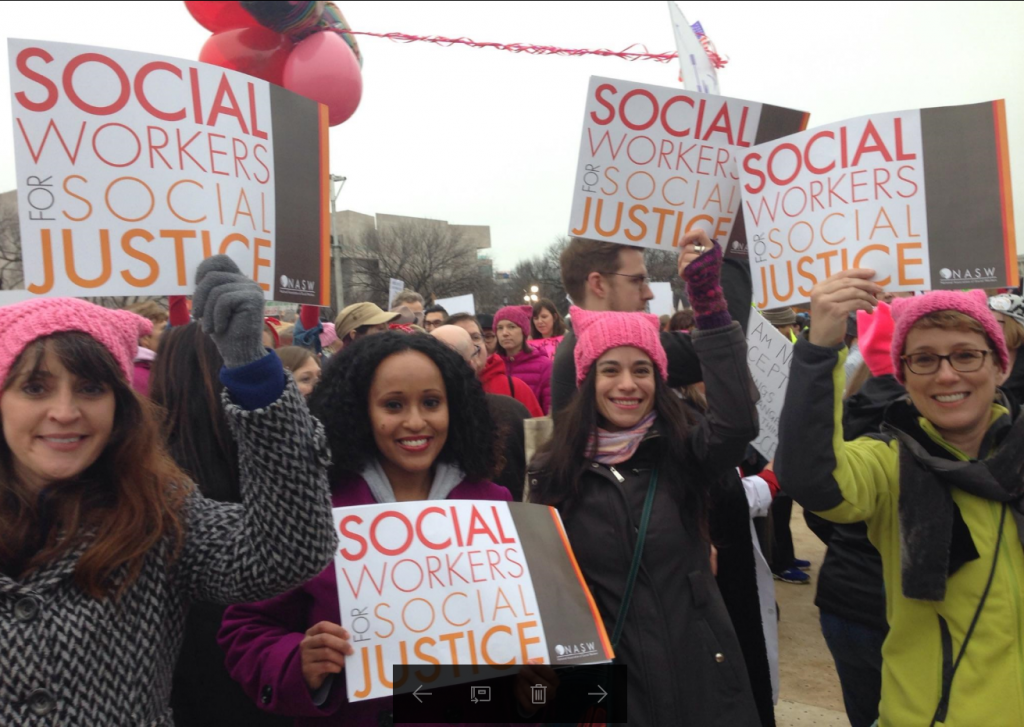 National Association of  Social Workers Senior Field Organizer Dina Kastner, MSS, MLSP, helped bring hundreds of NASW members to Washington, D.C. for the Women’s March on Washington on January 21. She decided to write about her experiences:

On Saturday, January 21, 2017, millions of women, men and children joined marches across the world as part of the Women’s March on Washington. The National Association of Social Workers (NASW) was proud to be a partner in the marches in Washington, D.C. and in cities across the country.

NASW had over 500 individuals sign up for the March in Washington, DC before we reached the capacity that the website platform would allow. Several more individuals contacted us directly to be involved in the March.

Now, here is my story about the March. The rally for the March started at 10am. I had longtime friends fly and drive in from Chicago and Rhode Island. My friend from Chicago is a social worker working in domestic violence. She arrived late Thursday night. On Friday we prepared for the March by making hand-made signs and getting food to have at the March. Late Friday night, my friend from Rhode Island, also a social worker, arrived with her friend. We knew we’d be getting up early Saturday morning to beat the crowds so we went to bed shortly after they arrived.

We left my house in a nearby suburb of Washington, DC at 7:30am. We were on a Metro train by 8:00am and made it to the NASW meeting spot just before 9:00am. The NASW marchers were expected to arrive between 10-10:30am. Our meeting spot was right near an exit of the Metro. Every so often, as people were coming up the escalators, a roar of cheers would erupt in the crowd. There was such a positive atmosphere.

The march was electrifying, inspiring and a whole lot of fun. I hope that those who marched and those who were unable to march take inspiration from the March and plant their own seeds for justice and equality for all.

At our meet up spot, we were joined by social workers from as far away as California and Oregon and as close as Maryland, Virginia, and Washington, DC. At 10:30 we started to head towards the rally. We made it as far as the National Mall. I ended up with a group of about 10 social workers. We had lots of Social Workers for Social Justice signs. As people walked by we heard cheers of “Yay social workers! “We asked if they were social workers and offered them a sign.

We tried to get close to the rally stage, but could only make it as far as Jefferson Drive. We were surrounded by people who all came to Washington in the hopes of making their voices heard. 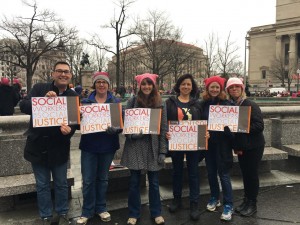 Dina Kastner (second from left) at the march.

The gathering was so large that it was difficult to find the actual march. This did not deter us. We marched down Jefferson Drive, over to the National Mall and down 7th Street before cutting out on Constitution Avenue.

There were amazing signs all around. My favorite said something like this: “They tried to bury us, but they did not know we are seeds.” The march was electrifying, inspiring and a whole lot of fun. I hope that those who marched and those who were unable to march take inspiration from the March and plant their own seeds for justice and equality for all.

We made it home around 5:00pm and were exhausted but energized. We shared a wonderful meal, posted our pictures on social media and slept well Saturday night.