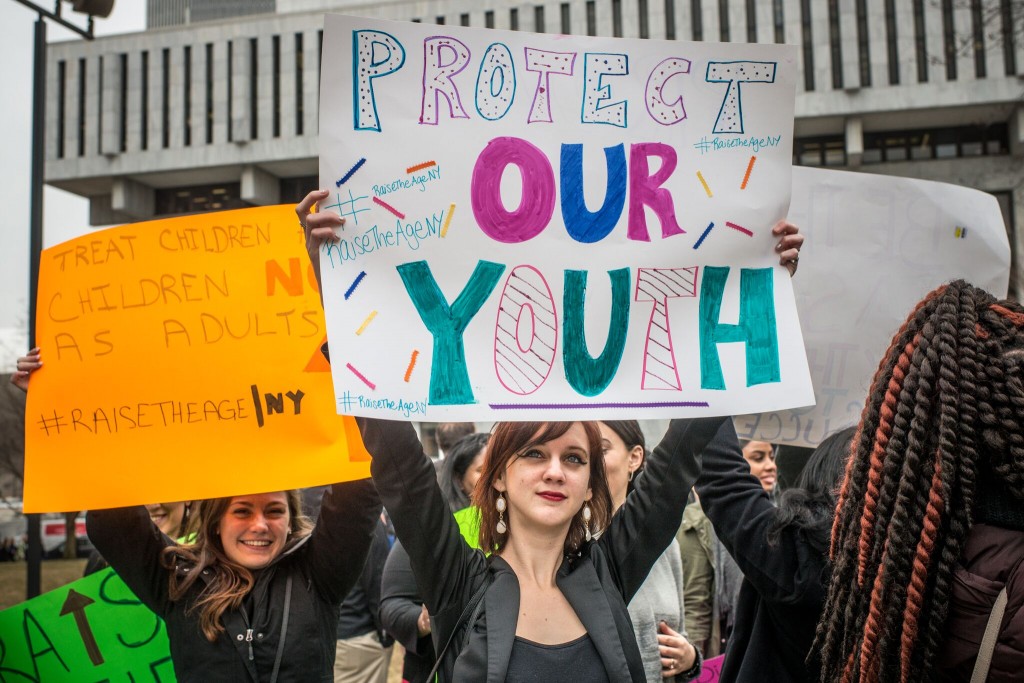 More than 850 social workers and social work students from across New York State gathered in Albany on March 28 to rally in support of raising the age of criminal responsibility from 16 to 18 years old and to demand that state legislators include this bill in the final budget.

The rally started at 10:30AM at West Capitol Park. Speakers included several juvenile justice reform advocates, including Richard D. Smith and Khalil A. Cumberbatch who were personally affected by the adult criminal justice system.

“As an incarcerated teen, I desperately needed treatment for trauma resulting from childhood sexual abuse. Locking me up in an adult jail at 16 normalized my anger and aggression and contributed to me losing over a decade of my life in prison,” said Richard D. Smith, who had been in and out of county jails and was eventually sentenced to a 10-year bid in state prison in Massachusetts at the age of 21. He earned his GED in prison and matriculated in the Boston University Prison Education Program, earning his degree within a year of his release and is now working toward his doctoral degree in social work at the University at Albany.

“When we’re discussing Raise the Age, we’re not only talking about legislation, but more importantly, we’re talking about children who have had their adolescence criminalized. To continue to be punitive towards these youth, is to be contrary to the very principles under which we prosecute them, i.e. fairness, accountability, justice, and humanity,” said Khalil A. Cumberbatch, a formerly incarcerated advocate for social justice movements in the New York City area. Today, Khalil works at JustLeadershipUSA, a non-profit dedicated to cutting the US correctional population in half by 2030, and lectures at Columbia University.

This year marks the organizations’ largest LEAD event to date and the second time that LEAD is calling for passage of a comprehensive Raise the Age initiative that would prevent many 16- and 17-year-old youth from being treated as adults in the criminal justice system. Last year, legislation was proposed by Governor Cuomo but legislators failed to pass a bill.

“The presence of over 850 social work leaders and student delegates demonstrates the true power of social work. This experiential learning initiative engages students in the political arena and equips them with knowledge and skills that are essential to social work practice. Our Association is excited to see their passion and presence,” said Dr. Lisa Z. Newland, Vice President of the New York State Social Work Education Association.

“We are hopeful this would be the year we finally see Raise the Age become law,” said Ron Bunce, Executive Director of NASW-NYS. “It is long past time for New York State to join with the other 48 states in the nation that recognize youth are not adults, and therefore should not be treated as such.”

“As a profession committed to promoting social justice and social change with and on behalf of clients, social work supports the Raise the Age Campaign because the safety and future of communities and the well-being of our children depends on society treating children appropriately,” said Dr. Victoria M. Rizzo, President of the NYS Association of the Deans of Schools of Social Work. 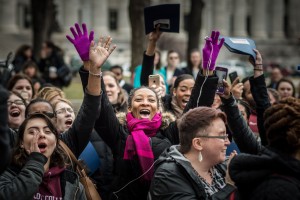 Research across the scientific spectrum overwhelmingly supports raising the age and demonstrates that our current system does not work, leads to higher recidivism rates, and re-arrests. By contrast, 37 states and the District of Columbia set their respective ages of criminal responsibility at 18; 11 states set it at 17; and the one state that shares New York’s distinction as a hold-out for criminal prosecution of 16-year-olds, North Carolina, has begun a process leading toward increasing its age of criminal responsibility to 18.

Treating children as adults in the criminal justice system is short-sighted and ineffective; youth incarcerated in adult facilities are more likely to suffer physical and emotional abuse, and to recidivate – realities that are at odds with the goal of rehabilitating youth and protecting public safety. By raising the age of adult criminal responsibility to 18, New York can reduce crime, lower recidivism rates, save taxpayer dollars, and provide young offenders with access to services to help get them back on track.

“I am a young person with a lifetime of possibilities to look forward to because I wasn’t discarded into the adult prison system, but was given the treatment I needed. My experience should be the standard, not the exception,” said Cortney Lovell, Founder and Director of Wrise LLC. As a teenager, Cortney struggled with addiction issues, eventually leading to her incarceration. She began her journey to wellness and recovery at the age of 19, after breaking out of a cycle of heroin addiction. She now advocates for greater access to recovery support for youth.

“It’s long past time for our elected officials to stop talking about Raise the Age and finally pass comprehensive legislation in this year’s budget,” said Elizabeth Powers, Director of Youth Justice at the Children’s Defense Fund – New York. “Automatically charging 16 and 17 year olds as adults is out of line with the rest of the country, exposes youth to harmful conditions and practices, and increases the likelihood that youth will return to the criminal justice system in the future.”

About the Raise the Age NY Campaign:

Raise the Age NY is a public awareness campaign that includes national and local advocates, youth, parents, law enforcement and legal representative groups, faith leaders, and unions that have come together to increase public awareness of the need to implement a comprehensive approach to raise the age of criminal responsibility in New York State so that the legal process responds to all children as children and provides services and placement options that better meet the rehabilitative needs of all children and youth.

About NASW-NYS:
The National Association of Social Workers – New York State Chapter in Albany, NY, is the largest membership organization of professional social workers in the state with over 8,000 members. It promotes, develops, and protects the practice of social work and social workers. NASW-NYS also seeks to enhance the well-being of individuals, families, and communities through its advocacy.

About NYSSWEA:
The New York State Social Work Education Association (NYSSWEA) is a statewide organization whose purpose is to provide a forum for social work faculty, dean and directors, field instructors, students, practitioners and administrators to exchange information regarding social work education and related issues, and to promote, encourage and support activities that provide a greater understanding of social work and the role and contributions of social work educators.