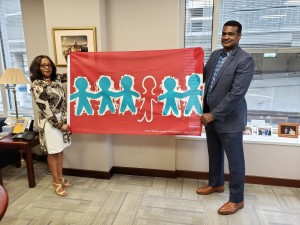 Each year, a national day of remembrance is set aside to honor and remember children who have lost their lives in the last year due to violence and preventable causes of death. Across the country, child advocates and others are displaying the flag in honor of Children’s Memorial Flag Day on April 26, 2019.

About 12,000 children and young adults, ages one  to 19 years, die from unintentional injuries each year, according to the Centers for Disease Control and Prevention.

These children die as a result of beatings, abuse, neglect, gun violence or from drug overdose or substance-abuse related accidents. Join us as today we remember those children who have senselessly lost their lives and as we recognize the millions of those who advocate and work tirelessly on behalf of all children—including social workers.

NASW urges those wanting to get involved in preventing child deaths to keep up-to-date on legislation and regulations that NASW supports to improve child welfare outcomes.

NASW’s child immigrant crisis media toolkit: For years, the United States has faced a massive influx of unaccompanied child immigrants from Central America. Many of these children and teenagers are fleeing deplorable conditions at home, including gang violence, crime and extreme poverty. Others are victims of drug traffickers and sex trafficking/sexual violence. Sadly, many of those detained in the United States in recent months have also suffered. Social workers are on the front lines, helping to provide these often-traumatized children with food, shelter and health and mental health care.

Every Child Matters: NASW is part of a coalition that released eight recommendations on how to end child abuse and neglect deaths in the United States. They are based on research and collaboration with 150 national experts in child welfare.