Haiti on Aug. 14 was hit with a 7.2 magnitude earthquake that has killed more than 2,000 people and injured more than 12,000.  The true scope of the disaster is unknown and the death toll will likely rise in coming days.

Haiti was in crisis before this latest disaster. Haitians have not recovered economically or socially from the January 2010 earthquake that killed nearly 200,000 people. And 140,000 people remain displaced from Hurricane Matthew in 2016. 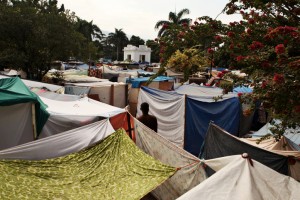 Camp set up by people displaced by an earthquake in Haiti. Getty Images.

These natural disasters have been compounded by the ongoing and destabilizing political turmoil that culminated in the July assassination of President Jovenel Moïse ― leaving the population under a daily threat of violence.

Over the years, Haiti has shown a high degree of resiliency in the face of these struggles― this capacity to survive is to be admired. However, there is a limit to resiliency. No country can or should be expected to endure continued poverty, political instability, and natural disasters.  For that reason, it is critical that the United States and the rest of the world respond to the August 2021 earthquake with compassion and medical, and economic support.

The U.S. policy on deportation of Haitian asylum seekers and those with Temporary Protective Status (TPS) is equally important. TPS was granted after the earthquake of 2010. Though not widely known, even before the latest political turmoil and the earthquake, thousands of Haitians have been stranded in less-than-ideal conditions in Mexican border towns as they seek asylum protection in the United States. Additionally, more than 2,000 more have been recently deported back to Haiti.

As Haitians struggle to cope with the deaths and consequences the August earthquake, the Biden administration should immediately halt all deportation and expulsion flights to Haiti. Moreover, the administration should promptly return to the United States Haitians who were deported although they were eligible for Temporary Protected Status (TPS) protections. Finally, avenues must be explored to gain the release of Haitian immigrants ―including Deferred Enforced Departure (DED)― detained in immigration facilities in the United States, Puerto Rico, and other territories and grant humanitarian parole to Haitians at the U.S.-Mexico border.

This is the least that we can do for a country that have been living through seemingly unending political upheaval and natural disasters for decades― if not centuries.