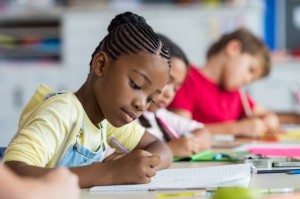 The National Association of Social Workers (NASW) on September 10, 2021, along with 32 other civil rights and public interest organizations, participated in the K.R. v. Duluth Edison Charter Schools amicus brief led by National Women’s Law Center (NWLC). The amicus brief supports four elementary and middle school students of color who allege they were subject to racial taunting and physical assaults regularly while at school and were subjected to a hostile education environment based on their race.

Our amicus brief supported the plaintiffs’ challenge, specifically arguing as a policy matter that disproportionate rates of school discipline for Black students denies them equal educational opportunities and benefits. We  provided policy arguments on how school appearance and grooming policies and practices lead to discrimination against Black students. Our brief also highlighted that when schools force Black students to cut or otherwise change their hair, it can cause serious emotional harm.

A copy of the K.R. v Duluth Edison Charter School amicus brief is attached and can also be found in NASW’s LDF amicus brief database.

NWLC has more information about the case in its blog post which also support it being promoted through social media.