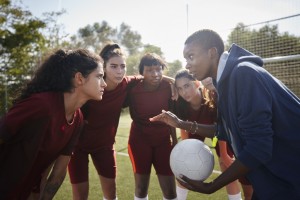 The Alliance Defending Freedom (ADF), a far-right conservative Christian group, challenged the Connecticut’s Interscholastic Athletic Conference policy on behalf of three cisgender female athletes. They argue that the policy violates Title IX, which prohibits sex discrimination in education programs or activities, because it allows women and girls who are transgender to participate in female sports. ACLU intervened as a defendant on behalf of two transgender women athletes.

Our brief focused on how excluding transgender women and girls from participation in sports consistent with their gender identity violates Title IX in line with Bostock v. Clayton County, Georgia and other circuit court decisions. We highlighted the harms to transgender women and girls that flows from exclusion from athletic participation consistent with gender identity. We also highlighted the fact that while gender-based disparities between male and female sports certainly exist, including access to sponsorships, scholarships, and adequate facilities, these are not because of the inclusion of trans women and girls, contrary to what ADF argues.

Our amicus brief also focused on how outdated stereotypes regarding athleticism and gender are being directed at transgender girls—especially girls of color who are also targeted because of their race—who are frequently told outright that they are not girls. This policing of gender has been used to justify subjecting transgender students to numerous additional barriers to participating in sports, ranging from onerous medical requirements to outright bans on participation. The benefits of athletic participation have been well documented and, transgender women and girls who are already vulnerable to discrimination in education, should have opportunities to reap the benefits of sports as do other women and girls.

Here is the final version of the Soule v CIAC Amicus Brief. It can also be found in the NASW’s LDF amicus brief database.