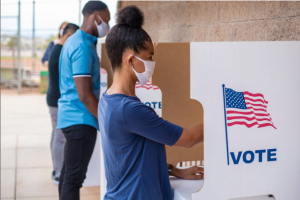 The National Association of Social Workers (NASW) is deeply disappointed by Senate gridlock and failure to pass the Freedom to Vote: John R. Lewis Act.

All 50 Republican Senators along with Democratic Senators Kyrsten Sinema of Arizona and Joe Manchin of West Virginia obstructed the path for progress on voting rights, by voting against a rule change that would allow a vote on the Senate floor late Wednesday. These Senators prevented action on the Freedom to Vote: John R. Lewis Act.

NASW sent a letter on Jan. 19th to Sinema, also a social worker, calling for her to support passage of this critical voting rights legislation. This communication follows months of active NASW advocacy to advance voting rights for all Americans.  Notably, NASW members responded to our action alerts by sending thousands of email messages to their lawmakers in the Senate.

The Senate’s failure means that people of color and historically marginalized populations will face additional barriers to carrying out their constitutionally guaranteed right to vote.  This inaction will continue to embolden efforts to pass restrictive state laws denying access to the ballot box and 34 states are already considering legislation that makes it more difficult to vote.

The fight for  justice cannot be measured in hours as this nation’s history has shown us that major steps toward progress in matters of social justice have always been met with resistance. Throughout our country’s history, Americans across race and place have protested, marched, confronted violence, and even died to cast  ballots and ensure others have the freedom to vote.

This movement to protect the essential freedoms and voting rights of all people remains indebted to the legacies of leaders and activists that showed unrelenting courage on behalf of the generations that remain in today’s good fight. Martin Luther King Jr once said, “Change does not roll in on the wheels of inevitability, but comes through continuous struggle.”

NASW remains steadfast in its commitment to voting rights and will not be deterred in our advocacy efforts to strengthen democracy and protect access to the ballot box for all Americans.