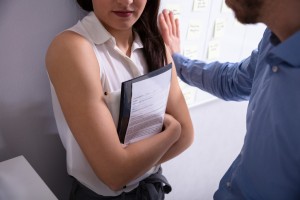 The case involves the scope of protections for employees of the federal judiciary who report harassment and other discrimination. Jane Roe (known now as  Caryn Devins Stirckland), a former assistant federal defender, was sexually harassed by her supervisor who took an obsessive interest in her by, among other things, insisting on “mentoring” her, offering to drive her home, leaving the office at the same time as her, pressuring her to meet him outside of the office, and berating her when she did not respond to his advances.

When she attempted to use the internal mechanisms available to her to report the conduct, she was not taken seriously and repeatedly stonewalled for requesting a safe workplace. She was required to use the Fourth Circuit’s mandatory alternative dispute resolution process, which denied her basic due process and equal protection rights, including:

Throughout the process, she was subjected to an increasingly hostile work environment due to her claims, forcing her to eventually resign to escape the harassment. She then filed a lawsuit to challenge the Fourth Circuit’s alternative dispute process, bringing due process and equal protection claims under the Fifth Amendment. In December 2020, the district court dismissed her complaint and she appealed.

Our amicus brief encouraged the Fourth Circuit to revive her claims, emphasizing that the federal judiciary should be held to the same standards as other employers when responding to employee reports of harassment and discrimination. The federal judiciary currently enjoys an anomalous exemption from Title VII, which would typically provide protections to employees who have been harassed at work, making it extremely difficult for judicial employees to report misconduct and receive an adequate remedy.

Judicial employees who are courageous enough to make a complaint are forced to instead use opaque and inadequate alternative dispute resolution processes, denying them full constitutional protections and failing to meaningfully remedy harassment and discrimination.

In effect, the judicial exemption has created a problem where a significant population of employees are left unprotected from misconduct that could be addressed in nearly any other workplace. Our brief called for the end of this judicial exceptionalism and urged the Court to reverse the lower court’s decision and recognize the Constitutional right of federal judiciary employees to work in an environment free from sexual harassment.

In its decision on April 26, 2022, the court agreed with us and properly recognized for the first time that “the Fifth Amendment’s Equal Protection Clause secures a federal judiciary employee’s right to be free from sexual harassment in the workplace.”