Picture Hawaii, just a little smaller, a little more humid and a lot more diverse. That essentially is Guam, according to Ovita Perez, manager of NASW’s Guam Chapter. 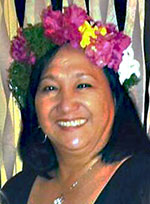 She says she was a late bloomer — social work-wise — and received her bachelor’s in social work in 2006 from the University of Guam. Originally planning to be a special education teacher, Perez switched to social work after a friend told her he didn’t really see her as a teacher.

“He said, ‘No Ovita, you’d be a better social worker than teacher. That’s where your heart is.’ So I took a social work world view class, and after that I was hooked,” she said.

After receiving her MSW — also from the University of Guam — Perez quickly took to the profession and NASW, becoming the president of the Guam chapter in 2009, and then most recently its manager, in 2013. She also works as a behavioral health counselor with the Guam Department of Youth Affairs.

“Ever since I was a young kid, I felt social work came to me,” Perez said. “Whether it was standing up for myself in school, taking care of my dad in hospice, or helping my son find the right outcomes for his dyslexia, it’s all about helping others, and fighting for yourself and your rights.”

The island, where Perez is a native, has a close-knit community. With a population of about 150,000, she says the social work profession in Guam is growing. There are currently about 200 social workers, and nearly half of them are NASW members — with student membership on the rise.

“The recognition of the chapter has really grown out in the Guam community, and in the last several years we have made our name known in the media, in the legislature and in the governor’s office,” Perez said.

The Guam Chapter was created in the early 2000s, and is fairly young as far as NASW chapters go. Over the last few years, the chapter focused largely on communicating the importance of licensed professionals practicing social work.

Through chapter efforts, Perez says the Guam governor has appointed that all members of the Guam social work board be licensed social workers and at least one board member, at all times, must be a member of NASW.

From the July 2015 NASW News. NASW members can read the full story here.