The northeastern Iowa farm where Gene Svebakken grew up had been in the family since his great grandfather worked the land in the 1850s. Growing up on a farm, he said, you become a caretaker of living things.

“My grandfather had bees. My neighbor had bees and sold honey,” Svebakken said. “I visited him and watched him work. Part of it was, I was curious. I was fascinated with them.”

But when he and his wife later went to a local dulcimer concert, a fellow named Clyde who was wearing bib overalls sat next to him. “This guy was probably 85,” Svebakken said. “He said he was a beekeeper and told Carol, ‘We need young men to be beekeepers.’ Then he said, ‘maybe you could go with me to a beekeepers’ meeting.’”

The next morning at 7:30, the phone rang and Clyde said, “There’s a beekeepers’ meeting today.” 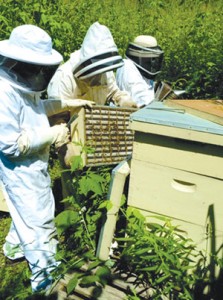 “I think with beekeeping, you have to be a continuous learner—learn to do things and figure things out,” said Svebakken, who has three hives now but has had as many as six.

“Three is my optimal number, because it takes a lot of work to be a beekeeper,” he said. “It takes a lot of time, and you have to do heavy lifting.” Patience also is required, because when it is below 50 degrees outside, “you have to sit and hope and wait for a nice warm day because you can’t check to see if they’re OK or not.”

You also have to learn about diseases bees can get and how to deal with those if they do, he said. “They require a lot of care.”

“I enjoy it, and I see it as a contribution to the well-being of the community,” Svebakken said. “You’re promoting nature. You’re contributing to the community. We have more honey than we need, so we give some away to neighbors and families.”

Svebakken also promotes taking care of the environment, and when people see the hives in his backyard and ask questions, he can help them understand the impact of pesticides on the environment. “We have to find other ways of helping the plants to be productive without using these pesticides.”

NASW members can read the full story after logging in here.