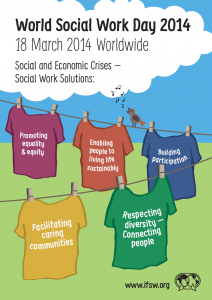 Photo courtesy of the International Federation of Social Workers.

The National Association of Social Workers (NASW) is today celebrating World Social Work Day 2014 by urging social workers in the United States and around the world to use their skills and talents to help solve social and economic crises.

NASW, the nation’s largest group of professional social workers, also wants to remind the public of the social work profession’s 116-year commitment to improving social conditions in the United States and the quality of life for all, particularly the most vulnerable. This is reflected in the theme “All People Matter” for Social Work Month 2014.

“The heroes of American social work, including social and political activist Jane Addams, U.S. Labor Secretary Frances Perkins, and civil rights leader Whitney M. Young, devoted their lives to world peace, the welfare of women and children, equal rights for all, and economic support for the nation’s most at-risk citizens,” said NASW President Jeane Anastas, PhD, LMSW. “Social workers in the United States and around the world, many of whom are unsung heroes, continue to support and advance these goals.”