The National Association of Social Workers Foundation (NASWF) has announced University of Iowa School of Social Work Associate Professor Mercedes Bern-Klug is recipient of its Knee/Wittman Outstanding Achievement Award for her nationally known work in improving care for people who are aging or at the end of their lives.

“The NASW Foundation is proud to bestow this honor upon Dr. Bern-Klug,” NASWF Director Robert Carter Arnold said. “Ms. Bern-Klug is a recognized leader and researcher on nursing home and end-of-life care. Her work has been the driving force in advancements in social work care for people who are older and has influenced state and national legislation and regulations.” 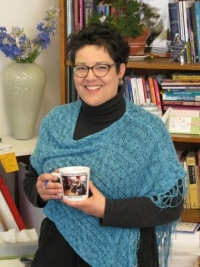 The NASWF Knee/Wittman Award was established through a bequest of Ruth Knee and Milton Wittman. The Outstanding Achievement Award recognizes an individual or group that has made a significant impact on national health and/or mental health public policy, professional standards, or exemplary program models.  The contribution may be in the development, interpretation, implementation, institutionalization, or expansion of health or mental health policy or legislation.

Over the past 30 years Bern-Klug, PhD, MSW, MA, has analyzed and strengthened social work service delivery and training and improved palliative and end-of-life care for adults who are older. Her work has also had a major impact on state and national policies regarding people who are older.

For instance, the Federal Trade Commission invited Bern-Klug to testify on the Funeral Rule, which requires funeral businesses to give consumers accurate prices and other information. Her testimony before the Kansas legislation on nursing facilities and end-of-life issues also made a positive influence on resulting laws.

In the mental health arena, Bern-Klug’s many publications, webinars, and conference presentations on psychosocial care in nursing homes are nationally and internationally recognized as the foundational work to consult when crafting nursing home legislation, rules and standards. And her book, “Transforming Palliative Care in Nursing Homes: The Social Work Role,” has been a major addition to gerontological social work research and practice.

Bern-Klug has also been a leader in many organizations that improve the lives of people who are older and has mentored future generations of gerontological social workers.

“Bern-Klug has dedicated her career to improving the well-being nursing home residents, people who are at the ends of lives, and their families – her commitment is evident in her caring and personable manner and her impressive body of work and research,” Arnold said. “And she has also passed on her expertise and passion for this work to future generations of social workers.”