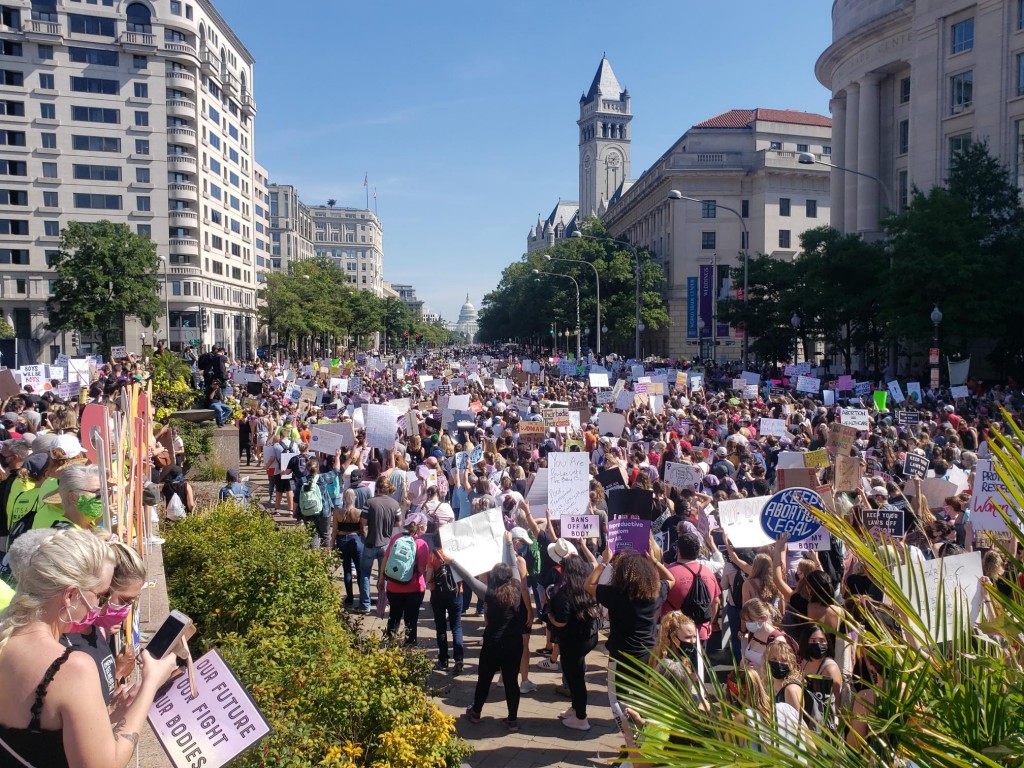 Protesters take part in the Women’s March for Reproductive Rights in Washington, DC, on Oct. 2, 2021

NASW’s National Committee on Women’s Issues (NCOWI) remains firm in its support of an individual’s rights over their reproductive health. NCOWI denounces efforts in numerous states to restrict access to reproductive health services and undermine rights protected under Roe v. Wade, particularly in Texas and Mississippi, whose efforts to eviscerate Roe are now being debated by the U.S. Supreme Court.

The U.S. Supreme Court on December 1 heard oral arguments in Dobbs v. Jackson Women’s Health Organization (JWHO). NASW joined an amicus brief on this case, which regards a law passed in Mississippi in 2018 banning any abortion operation after the first 15 weeks of pregnancy, with exceptions for medical emergencies or severe fetal abnormality, but not for cases of rape or incest. The case takes aim at the Supreme Court precedent barring states from banning abortions prior to a fetus becoming viable. If the Court fails to uphold Roe, countless number of people who can become pregnant, in 26 mostly southern and midwestern states, could lose access to abortion.

The Supreme Court on November 1 heard oral arguments on a different reproductive health access case, Whole Woman’s Health v. Jackson, which regards a Texas law, S.B. 8, that went into effect on September 1, 2021. Despite well-established Supreme Court precedent that prohibits states from banning abortions before fetal viability, S.B. 8 prohibits an abortion if a “fetal heartbeat” is present, at about six weeks. The law is not enforced by the state, but rather allows anyone to sue any individual who performs or knowingly “aids and abets” an abortion (e.g., medical providers, family members, friends – but not the pregnant person themself) after a so-called heartbeat is detected. There are severe consequences: an injunction, a minimum of $10,000 in damages, and attorney’s fees. The law has had the effect of halting all abortions in Texas after six weeks of pregnancy. States have long adopted unconstitutional laws, usually invalidated in federal court, to try to block abortion access. To avoid this fate, Texas relies on vigilante justice — unlimited enforcement by private individuals — to avoid the involvement of state officials.

In Alabama, Governor Kay Ivey signed legislation in 2019 that would consider performing an abortion a felony. The Supreme Court has ruled multiple times that states cannot flatly prohibit abortions before the fetus is viable, or roughly 24 weeks. If the Supreme Court overturns Roe, it would evoke, within months, “trigger laws” that ban all abortions across 12 states.

Weakening and/or striking down of Roe would undoubtedly result in a return to traditionally dangerous tactics to end a pregnancy, which for millions of individuals in previous decades resulted in death. In parts of the world where abortion is illegal, botched abortions still cause approximately eight to 11 percent of all maternal deaths, or about 30,000 each year. Contrary to myth, Roe v. Wade did not create abortion. Estimates of the annual number of illegal abortions in the 1950s and 1960s range from 200,000 to 1.2 million.

In addition to the primary implications of restricting an individual’s human right to reproductive health care, legal decisions on this issue have extensive impacts in restricting access to health care in general. More than 42 percent of services provided non-profit organizations such as Planned Parenthood are for treatment and prevention of sexually transmitted infections (STIs), 34 percent are provision of contraception, and 9 percent for cancer screening. Many people seek these services due to lack of health insurance coverage. Individuals who are low-income are disproportionately impacted by these restrictions: clinics are forced to close, and the cost of travel to clinics hundreds of miles away are often too much to bear for individuals who earn a lower wage. Many people who seek abortion services are already parenting children, and many work in jobs that do not have flexibility for time off to travel to receive these services.

Criminalizing an individual’s ability to obtain an abortion does not reduce the abortion rate and is associated with a much greater risk of complications and death. To make abortion legal is not enough. Access to safe abortion substantially depends on the capacity and willingness of physicians and the health system to provide safe services, which sometimes are made available despite restrictive laws.

As social workers, we play a crucial role in protecting Roe. We must continue to advocate for reproductive justice, including securing passage of the Women’s Health Protection Act by Congress and undertake advocacy at the state level. These efforts are consistent with the NASW Code of Ethics, in challenging social injustice and in protecting the inherent dignity and worth of people.

The NASW National Committee on Women’s Issues (NCOWI) is a committee of the national NASW board that monitors legislative and policy changes that significantly impact women.