From the Canadian Association of Social Workers: 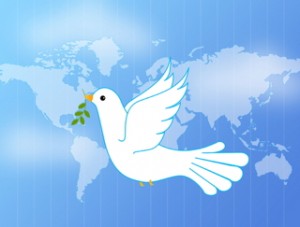 “We must not fail the billions who look to the international community to fulfill the promise of the Millennium Declaration for a better world. Let us keep the promise.” — UN Secretary-General Ban Ki-moon

For social workers, the issues of peace and social justice are inextricably interwoven. This is why the Canadian Association of Social Workers (CASW) has chosen to mark the United Nations (UN) International Day of Peace.

At the UN Millennium Summit in 2000, all member countries, including Canada, signed a Millennium Declaration committing to do their part to reduce extreme poverty, hunger, disease, illiteracy, environmental degradation and discrimination against women by 2015.

Likewise in 2000 the International Federation of Social Workers (IFSW), of which the CASW is a member, adopted an International Statement on Peace and Social Justice that called for its member associations to press their national governments for pledges in the reduction of arms expenditures, an increase in social development expenditures, and a renewed commitment to conflict resolution through the UN.

“Peace is threatened by unjust economic, social and political orders,” stated CASW President Darlene MacDonald. “Social workers stand with the most vulnerable, marginalized and exploited in the world in demanding that our nation’s leaders embrace every opportunity to build on the commonalties that will bind our individual struggles for peace into collective action.”

The UN Millennium Development Goals Report 2010 notes that more than 42 million people are currently displaced by conflict or persecution. Moreover, hundreds of thousands of women die annually from complications during pregnancy or childbirth, 99 percent of them in developing countries.

“With only five years left until the UN Millennium Development Goals 2015 deadline, it is imperative that countries maintain their commitments,” stated MacDonald. “Social workers understand that extreme poverty is a denial of the human spirit and limits the potential of peace.”