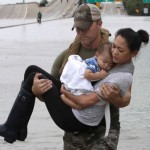 NASW TEXAS CHAPTER: In accordance with section 418.016 of the Texas Government Code, the Office of the Governor temporarily suspends all necessary statutes and rules to allow health care providers employed by a hospital and licensed and in good standing in another state to practice in Texas in order assist with the Tropical Depression Harvey disaster response operations.  Hospitals must ... END_OF_DOCUMENT_TOKEN_TO_BE_REPLACED