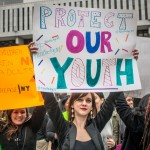 FROM AN NASW NEW YORK STATE CHAPTER PRESS RELEASE: More than 850 social workers and social work students from across New York State gathered in Albany on March 28 to rally in support of raising the age of criminal responsibility from 16 to 18 years old and to demand that state legislators include this bill in the final budget. Sponsored ... END_OF_DOCUMENT_TOKEN_TO_BE_REPLACED

The United States has the highest incarceration rate in the world. In 2013, there were 2.3 million persons in U.S. prisons and jails. Eventually 95% of these people will be released. As of 2013, there are 850,000 persons on parole after release. Yet these people have great difficulty re-integrating back into society. The data shows that within 3 years of ... END_OF_DOCUMENT_TOKEN_TO_BE_REPLACED