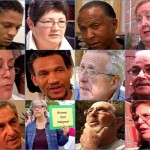 In the summer of 1967, after several suicide attempts, 17-year-old Lucy Winer was committed to Kings Park State Hospital’s female violent ward. More than 30 years after her discharge from the mental institution Winer—now an award-winning filmmaker—returned to Kings Park in New York for the first time to revisit her experience. The result was the critically acclaimed documentary, Kings Park: ... END_OF_DOCUMENT_TOKEN_TO_BE_REPLACED