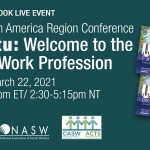 Video: Can We Live up to the Social Work Legacy? Please take a moment to view a video NASW just recorded for you regarding the Dorothy I. Height and Whitney M. Young, Jr. Social Work Reinvestment Act (H.R. 795/ S.686. This legislation is a first step to address serious workforce challenges such as low salaries, high educational debt, and safety ... END_OF_DOCUMENT_TOKEN_TO_BE_REPLACED

The National Association of Social Workers was outraged to hear Alaska Governor Sarah Palin, one of the nation’s vice-presidential candidates, malign in a live international broadcast the work of community organizers. The social work profession takes great pride in its community organizing roots and lauds the contributions of its members, and other professionals, who commit their careers to helping residents ... END_OF_DOCUMENT_TOKEN_TO_BE_REPLACED

Register today Socialworkchat.org Meet and Greet Chat on Tue, Jan 29, 2008 NASW and the New Social Worker Online are delighted to announce that we will be opening the chat room for a meet and greet, Tuesday, January 29th at 9 PM EST. Old and new chatters are welcome and registration is free! The chat will be about an hour, ... END_OF_DOCUMENT_TOKEN_TO_BE_REPLACED

Yes, I want to contribute to the NASW Foundation!

The NASW Foundation is uniquely yours — the sole national charitable organization that is: addressing the needs of individual social workers, advancing the social work profession at the highest levels, and enhancing the well-being of individuals, families, and communities. The success of Foundation initiatives is vitally dependent on contributions from those who care most about the social work profession — ... END_OF_DOCUMENT_TOKEN_TO_BE_REPLACED