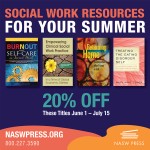 Your 20% discount for Summer Social Work Resources books will automatically be applied to your print book order prior to the final credit card charge. For more information about the summer sale and all NASW Press titles, including books, eBooks, reference works, journals, brochures, and standards, visit the NASW Press website. If you have questions please send an email to ... END_OF_DOCUMENT_TOKEN_TO_BE_REPLACED 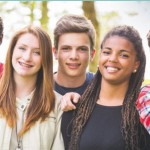 November is National Adoption Month. This month we celebrate the families who have already been joined through adoption and call attention to the children and youth who are still waiting for a permanent family. This year’s National Adoption Month is focusing on older youth in care, specifically 15–18 year olds in foster care. This year’s theme highlights the importance of ... END_OF_DOCUMENT_TOKEN_TO_BE_REPLACED

By Rena Malai, News staff The Health Resources and Services Administration, part of the U.S. Department of Health and Human Services, has awarded 24 schools of social work and psychology with grants totaling $9.8 million. The grants, through the Mental and Behavioral Health Education and Training Grants Program, were  made possible by the Affordable Care Act. According to HHS, mental ... END_OF_DOCUMENT_TOKEN_TO_BE_REPLACED

From NHPCO: November is the best time to thank those who ensure that you provide the best care possible to your patients and families.  Celebrate the month by recognizing those who listen and provide hands-on care. Whether they are staff or volunteers, work in the office or out in the field, donate to your program, or refer patients to hospice – let ... END_OF_DOCUMENT_TOKEN_TO_BE_REPLACED

Thanks to our Advocates, NASW Advocacy Days Were a Success NASW is pleased to announce that our virtual advocacy days were a great success! Hundreds of social workers from across the country contacted their Senators and Representatives in support of the Dorothy I. Height and Whitney M. Young, Jr. Social Work Reinvestment Act (S. 584/H.R. 1106). At the same time, ... END_OF_DOCUMENT_TOKEN_TO_BE_REPLACED

Violence and all forms of oppression against women and girls remains a continuing problem that affects all women regardless of race, sexual identity, socioeconomic status, or any other identifying characteristic. Domestic violence disproportionately affects woman and is a pattern of behavior in a relationship that is used to gain or maintain power and control over an intimate partner.  Social workers ... END_OF_DOCUMENT_TOKEN_TO_BE_REPLACED

Celebrate Social Work Month – March 2010 The 2010 Social Work Month theme is “Social Workers Inspire Community Action” Since its inception, the social work profession has worked to improve life for millions every day. Social workers operate from values that recognize each person as relevant to society and believe that, when needed, society should help each person achieve his ... END_OF_DOCUMENT_TOKEN_TO_BE_REPLACED