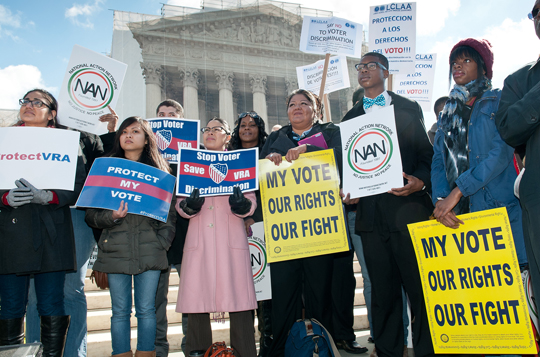 The introduction of the Voting Rights Amendment Act of 2014 was in response to the U.S. Supreme Court’s decision on the case Holder v. Shelby County in which Shelby County, Alabama challenged the Attorney General’s authority to require the county to pre-clear changes in its voting procedures as required in Section 5 of the Voters Rights Act of 1965.

The essence of Section 5 is that it mandated that nine states in the South (and a few other non-southern jurisdictions) with histories of voter rights violations were required to have any changes to their voting procedures approved by the Attorney General.

The Supreme Court sided with Shelby County by ruling that Section 4 of the Voters Rights Act, which determined the formula for pre-clearance, was unconstitutional. Without the formula to determine whether or not a jurisdiction had to submit to pre-clearance, Section 5 became ineffectual.

The national response from the social justice community, including the National Association of Social Workers, to the Supreme Court’s decision was unanimous and swift. We pointedly disagreed with the ruling and joined a national coalition that would come up with ways to remedy the damage it caused to monitoring a long history of discriminatory voter laws several states.

Voter rights advocates were particularly uncomfortable with Chief Justice John Robert’s opinion  that ….the singling out of Old South states, for what’s called “preclearance” by the Justice Department, makes little sense now that blacks are as likely to register to vote as whites in those states, or nearly so.

The premise that because there has been an increase in African American voting since 1965 the “pre-clearance” states had ended voter discriminatory practices. The Chief Justice’s premise is flawed when one recalls that  up until  2013 as many as 34 states had implemented voter identification laws, many of which, had there not been legal challenges and court victories, could had the effectively suppressed the votes of millions of people, especially members of the African American and Latino communities.

By contrast, at the time of the Shelby County v. Holder decision, Justice Ruth Bader Ginsburg stated that,  “The Voting Rights Act became one of the most consequential, efficacious, and amply justified exercises of federal legislative power in our Nation’s history. Thanks to the Voting Rights Act, progress once the subject of a dream has been achieved and continues to be made.”

The court was of two minds with a 5-4 split on deciding that Section 4 was unconstitutional. However, in reading Chief Justice Roberts more closely, legal experts recognized that Roberts suggested that he may look favorably upon a Voters Rights Act that eliminated what he felt was a lack of recognition that the “pre-clearance” states have made since 1965.

Strategically, the Voter Rights Coalition reached out to several key members of Congress to see if there was a way to generate support for new voter rights legislation that would address Chief Justice Roberts’ concerns and at the same time restore oversight authority to the Department of Justice to protect against repressive voting laws and policies.

The Coalition received a positive response from Reps. Conyers and Sensenbrenner for a bipartisan Voters Rights bill in the House. Senator Patrick Leahy (D-VT) agreed to work with the House leaders and to champion the House’s legislation in the Senate.

In addition, the Republicans in both the House and Senate signaled that it would not block bipartisan voter rights fixing legislation.  With that information in hand, the Voters Rights Coalition created three task forces (Communication, Lobbying, and Outreach) comprised of many national social justice/voters rights organizations with an objective of mobilizing the nation in support of the new Voters Rights bill.

The first important milestone to reaching that goal was when Reps. Conyers and Sensenbrenner introduced the Voting Rights Amendment Act of 2014.  Rep. Sensenbrenner’s support is significant because he is a highly respected Republican who has a reputation of working “across the aisle” on social justice issues. For example, in 2007 Mr. Sensenbrenner was a co-sponsor of the Second Chance Act which was one of the first funded pieces of legislation that provides service for individuals that reenter society after being incarcerated.

This is not to say that everything will be smooth sailing from this point on (it is expected that the bill will be voted on in July of 2014). For instance, not every provision in the Voting Rights Amendment Act of 2014 is to the Voters Rights Fix Coalition’s liking.

In order to ensure support from the House leadership, Congressional negotiators and the advocacy legal team agreed to accept language from House Majority Leader Eric Cantor (R-VA) concerning voter ID laws implemented and/or planned by a number of states.

Section 5 of the original Voters Rights Act required jurisdictions that were subject to pre-clearance (essentially Southern States with histories of voter discrimination and suppression) could not implement voter ID laws without approval from the Attorney General.

Rep. Cantor’s language will exclude voter ID laws as possible basis for the Justice Department to allege that a given state has unfairly suppressed the ability for minorities and other groups to vote.

A number of those from the voters rights advocacy community were wary of the Cantor’s voter ID provision. However, the Voter Rights Fix Coalition’s legal experts point out that they had helped to strengthen a key provision (Section 3) of the original Voters Rights Act and include it in the amended legislation.

Section 3 will allow the Attorney General to challenge a voter ID law that, on its face, is so restrictive that it intentionally or unintentionally suppresses the vote of minorities or other groups. The strengthening of Section 3 is seen as an offset to the concerns about the Cantor voter ID provision in the Voting Rights Amendment Act of 2014.

The commentary in the media after to release of the news of the introduction of The Voters Rights Amendment Act of 2014 was cautious optimism among members of Congress and the advocacy community about the prospects of the bill being passed in July.

Support for a new Voters Rights bill received a boost from Vice President Joe Biden when he spoke at the National Action Network’s King Day Breakfast. At that event, V.P. Biden stated that “….the outcome of the immigration reform and income inequality debates rests ultimately on the ballot box,” warning civil rights activists to keep fighting to restore the core of the Voting Rights Act.

It should be mentioned that coincidentally another high-level voters rights document was issued at almost the same time that the Voters Rights Amendment Act of 2014 was introduced. The American Voting Experience: Report and Recommendations of the Presidential Commission on Election Administration is the final draft report from President Obama’s Commission on Voting Reform.

We should be careful about confusing the presidential report with legislation to fix the Voting Rights Act.

The Presidential Commission on Election Administration’s recommendations are directed at  improving the nation’s voting process in order to eliminate all barriers to access to the ballot box for all Americans. The Voting Rights Amendment Act of 2014 is focused on ending and preventing discrimination in voting procedures that have historically impeded and suppressed the votes of ethnic minority population and women.

Therefore, we encourage social workers to support both efforts to improve and protect the right to vote.

In all, the introduction of the Voting Rights Amendment Act of 2014 was a major accomplishment for the Voters Rights Fix Coalition. NASW’s affiliation with the coalition and our work on the Voters Rights Fix Task Force are indicators of NASW’s commitment to the central objective ensuring that the access to the ballot for all citizens is protected by law.

The Voter Rights Fix Coalition will be holding events in Washington, DC on February 6 and 7  to kick off the national campaign to pass the Voting Rights Amendment Act of 2014. On Feb 6 there will be a lobby-day when voter rights experts from a number of organizations will join together to encourage members of Congress to support the Voting Rights Amendment Act. That same evening, there will be a reception held at the Library of Congress from  5:30 and 7:30 p.m. On February 7, 2014, there will be a day-long Voters Rights Conference to be held at the Hyatt Regency Hotel in Washington, D.C. Registration ends on January 24.