Read Justice Brief for Update on NASW Activities Regarding Ferguson 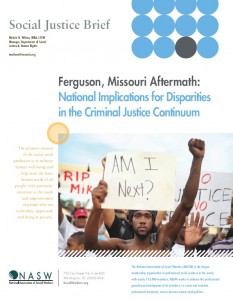 It has been more than two months since a policeman in Ferguson, MO, shot and killed unarmed African American teenager Michael Brown, sparking protests in that city and around the nation.

Despite the tragedy the National Association of Social Workers and other organizations see the incident as opportunity to end police profiling of people of color and apply best practices when police are apprehending people who are severely mentally ill.

The NASW Social Justice Brief “Ferguson, Missouri Aftermath: National Implications for Disparities in the Criminal Justice Continuum offers an update on activities NASW is participating in to try to prevent future incidents such as Ferguson.

These include a Congressional briefing that highlighted legislation from Sen. Ben Cardin (D-MD) to end racial profiling. NASW representatives were also at a gathering of more than 100 civil rights organizations where concrete strategies were developed to prevent future Fergusons.

Read the Social Justice Brief to get the latest information on Ferguson from NASW headquarters. And to learn more about how you can get involved contact Mel Wilson, MBA, LCSW, manager of NASW’s Department of Social Justice and Human Rights, at mwilson@naswdc.org.