A video of School Resource Officer (SRO) in South Carolina flipping, tossing and manhandling a 16-year-old female high school student has gone viral, again raising concern and questions about the presence of police  in schools, the criminalization of certain behavior by juveniles, and racial disparities in cases of excessive use of force by law enforcement.

While the Spring Valley High School student may have broken school rules and, as reported, struck the officer, there is a question as to why this should have been a police matter in the first place.

The original behavior that prompted school administrators to call the resource officer for assistance concerned the student’s refusal to leave the classroom by a teacher and the principal and for exhibiting what appeared to be oppositional defiant and conduct disorders.

Prior to the introduction of resources officers in schools, the school administrator would have handled such a situation unless the student was physically violent and posed a threat of physical harm to themselves, other students or staff. But in this case, the school resource officer was called in to take charge.

The SRO program has been in place since the early 1990s when thousands of districts, often with subsidies from grants from the Department of Justice Community Oriented Policing Service (COPS), paid local police agencies to provide armed SROs for high schools, middle schools and in some cases, elementary schools.

There is a growing consensus that many SRO programs have strayed from their original purpose and have focused almost entirely on the law enforcement role. The Spring Valley High School incident reinforces how troublesome the presence of SROs in schools can be.

Compounding the problem is that the vast majority of the thousands of students are arrested or given criminal citations at schools each year are African American and Latino children. Those with cognitive disabilities are also disproportionately represented.

Many of these cases will be actually adjudicated in juvenile courts, leaving the students with a criminal charge or conviction for relatively minor offenses. For instance, the teenager in the South Carolina incident will be charged under the state’s disturbing schools law, a misdemeanor that allows police to arrest a student for disrupting class or school functions.

Though she was released to her parents, the county will continue to pursue prosecution under the disturbing schools law, according to news reports.  The two following quotes from Justice Quarterly effectively make that point:

“…the most striking impact of school police officers so far, critics say, has been a surge in arrests or misdemeanor charges for essentially nonviolent behavior — including scuffles, truancy and cursing at teachers — that sends children into the criminal courts.”

“There is no evidence that placing officers in the schools improves safety, and it increases the number of minor behavior problems that are referred to the police, pushing kids into the criminal system.”

By all accounts, the teenager who was handled so violently by the SRO defied teachers and school administrators by being disruptive (for not putting her cell phone away) and not leaving the classroom as instructed. However, there is nothing to indicate that she posed a physical threat to fellow students, teachers or administrators.

School Social Workers are a Solution

Why did this behavior rise to the level of intervention from a law enforcement officer? Were there no other options such as having the school counselor or school social worker attempt an intervention to de-escalate the situation? Part of the answer to those questions is that it is very likely that Spring Valley High School may not have a full-time school social worker or counselor on staff. 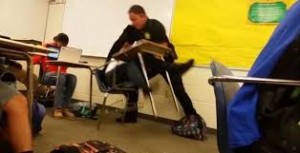 A School Resource Officer was fired for reacting violently against a disobedient teenager at Spring Valley High School in South Carolina.

Criminalizing student misconduct is made more insidious when we realize that at the same time school districts are reducing the number of professionals trained to handle such cased where a student exhibits behaviors that are unacceptable in school, but do not reach the level of physical danger to other students or staff.

For example, a report on budget impact on school social workers states that in California’s 2010 academic year, there was only one school social worker for every 15,000 public school students. The report went on to emphasize that social workers often assist students in dealing with stress, emotional problems, work directly with children with disabilities and their families, and address problems such as misbehavior, truancy, teenage pregnancy, and drug and alcohol problems.

With that in mind, it would appear to be without question that a school counselor or school social worker would have been a better choice to resolve the Spring Valley dispute than an SRO.

The National Association of Social Workers applauds the Department of Justice for opening a full investigation of the incident. NASW believes the dismissal of the SRO who was so grossly over-aggressive in his treatment of the teenage student.

And NASW  agrees with NAACP President and CEO Cornell William Brooks when he said, “This [incident] is also a clear indication that the shifts in resource and spending by school districts have created an over-reliance on armed police instead of educated and trained school administrators.  It is unfortunate that our school principals and vice principals, the traditional administrators of school discipline, have been put in a position to rely on street policing inside our school classrooms rather than administering tried and true education discipline tactics and policies.”

Graduation or Incarceration? How School Discipline Policies Shape the Path for Vulnerable Students

Call the Principal, Not the Police: Preventing the School to Prison Pipeline

The School Social Worker in Crisis Situations: The Right Skills, The Right Professional