NASW was invited to participate in a meeting last Friday, Aug. 23, at the White House to discuss the President’s Roadmap to Empower Veterans and End a National Tragedy of Suicide (PREVENTS) initiative. NASW Chief Executive Officer Angelo McClain and I attended. 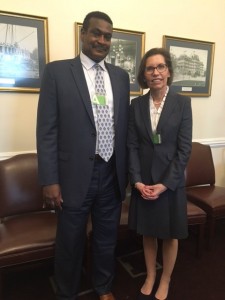 The meeting included Surgeon General Dr. Jerome M. Adams and key leaders from the Veterans Health Administration, the Centers for Disease Control (CDC), Substance Abuse and Mental Health Services Administration (SAMHSA) as well as the American Medical Association, the American Psychiatric Association and the American Psychological Association. PREVENTS was launched in March by executive order of the President. It will conclude next March 2020 when the task force delivers a “national public health roadmap” to the President articulating a plan for preventing and eliminating veteran suicide.

Click here for more details about the National Roadmap to Empower Veterans and End Suicide.

The task force also will deliver by next March a legislative proposal outlining grants to local communities to increase coordination and integration of services and support to promote veteran well-being. This includes elements such as housing and other social determinants. Addressing the role of substance use disorders in suicide will also be a focus.

As a first step, NASW National will be supporting communications-related efforts starting in September. This will include a joint statement with the other provider groups, a Facebook Live event and a Twitter event.

Over the next year, we look forward to providing a much-needed social work perspective for the roadmap and taking other actions to support this initiative.

Anna Mangum, MSW, MPH is Deputy Director of Programs for the National Association of Social Workers. She can be reached at amangum.nasw@socialworkers.org