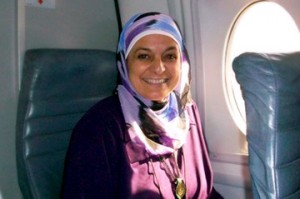 Rose Hamid, a flight attendant for US Airways, has spoken about the negative reaction she gets when wearing her hijab at work. Photo courtesy of Worldhum.com.

Social workers seek social justice for all and have long worked to end racism and discrimination. Yet they are still human.

National Association of Social  Workers member Pamela Lowell, MSW, LICSW, who has a private practice in Barrington, RI, and is also an author, was traveling home from Florida on December 6.

The recent terrorists attacks in Paris and San Bernardino, Calif. were on her mind. Then a woman wearing a hijab sat next to her on the plane.

I was walking down the aisle towards my seat, and I realized that you were probably the same age as me, middle-aged, dressed in your white burka and black dress.

And, I confess that, even as a life-long social worker, even as a Democrat, an anti-gun, pro-choice, pro-gay marriage, white, liberal, who works at an almost all black social service agency (located beneath a mosque!) I felt a sudden trace of fear—mostly because, we were on a plane for goodness’ sake, and after numerous attempts to try to greet you, to smile, you just stared in front of you, blankly, refusing to meet my gaze!

And as I stuffed my carry-on bag under the seat in front of me, I noticed you tapping on your cell phone, quite a lot of tapping, and I tried to glance at you again (because after all, we were to be sitting next to each another for almost three hours) but you wouldn’t turn my way.

That unnerved me, if I’m truly honest. All that cell-phone tapping. And why wouldn’t you look at me, I was thinking, unless you had something to hide?

Anyway, I became engrossed in my book as we were taking off, and then oddly, I felt my seat move, and your head was level with the tray table, up and down and up and down again, and after a few confusing moments, I realized you must be praying, and yet, I confess, and I’m sorry, but I still felt uneasy—(praying for what, I wondered?)

All of a sudden, though, you sneezed. Just a small tiny sneeze. And, I responded, reflexively, saying “Bless you,” and, then just a few moments later, digging in your bag, grabbing for a napkin, peeling the fruit carefully, and putting the rind into your cup, you finally looked at me, and offered me a slice of orange.

I said, “No thank you,” and then we both smiled. We didn’t say anything else for the rest of the flight, but somehow, I’m sure of this now, the tiniest of connections was made.

And, also I’m thinking now, that maybe fear is the reason you didn’t want to look at me in the first place. Maybe you just get tired of seeing the fear and–sadly more often now–hatred reflected back into your eyes. But in that moment, our moment, after I blessed you, and after you offered me your food, after our one small moment of communion and connection, I like to think that we both felt a little less afraid.

Social workers are committed to equal rights for all. To learn more visit the National Association of Social Workers’ Diversity and Equity website. Also read NASW’s statement on the recent Syrian refugee crisis and anti-Muslim rhetoric.