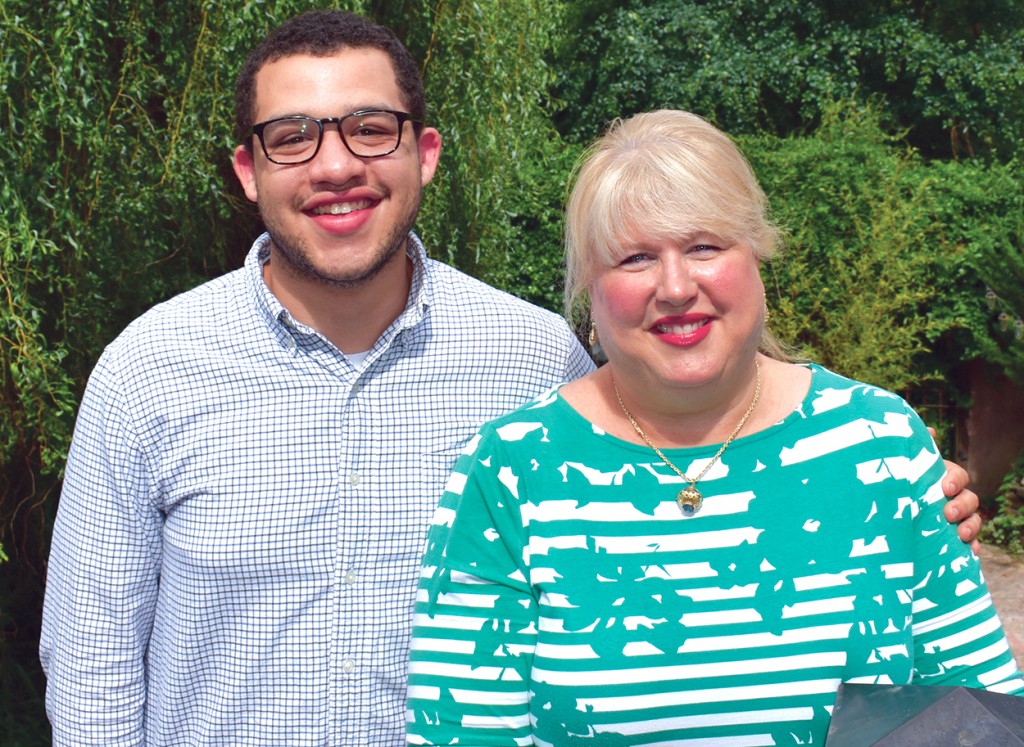 Social worker Maura Nsonwu, right, stands with her son, Zik, who is working on his BSW.

When Maura Nsonwu was a teenager and her mother, Mary Anne Busch, was working on her master’s degree in social work, her mother called the children into the room to try out a family therapy technique: family sculpture.

It calls for the client and all family members to be physically placed in a way that indicates how close they are, said Nsonwu, BSW, MSW, Ph.D. and associate professor and interim BSW program director at North Carolina Agricultural and Technical University in Greensboro.

“She was learning about Virginia Satir and wanted to position us so it would show how we all relate to each other,” she said. “The four of us were teenagers, and it did not go over well.”

“That really shows you that you can’t do social work with your family. You can have some interesting conversations, but when it comes to family, doing social work doesn’t work out so well.”

The story brought a laugh from her son, Zik Nsonwu, who quipped, “It’s a good way to get locked out of the bathroom the next morning.”

Nsonwu’s sister is a social worker and Zik is working on his BSW with a double major in political science.

The family is one of many for whom social work is a proud family tradition. For some, it links two generations. For others, it’s multiple generations, and brothers and sisters too.

Kathy Byers’ brother, Rick Gustafson, is a retired social worker in Indianapolis, and both of her parents were social workers. Her father, Howard F. Gustafson, was elected NASW president in 1964. He and her mother, Nellie Gustafson, are both NASW Foundation Social Work Pioneers®.

“They met in grad school at Case Western Reserve University in Cleveland,” Byers said. “She was interested in group work, he in community organizing.”

They were married, and World War II came along. Her dad was a conscientious objector, which meant you served for the duration of the war, she said.

“For a while, she stayed in Cleveland and he was planting trees in Michigan and doing things like that,” Byers said. “At some point the federal government said ‘Gee, he has a master’s in social work. He can do more than plant trees.’ He was sent to the Virgin Islands to do work there.”

After she was born and the war was over, her father worked as director of the Community Service Council in Houston, then in the same position for the same council in Indianapolis, doing overall planning and working on issues like poverty and housing. Her mother stopped working but was “very involved” with groups, including the League of Women Voters, the Girl Scouts and the PTA, Byers said.

“Dinner table conversations included what was going on in the world and people who were involved in the community and what they were doing to make it a better place,” she said. “I assumed that whatever career I chose, it would involve making the world a better place and helping people.”

She was in high school during the Freedom Summer, also called the Mississippi Summer Project, but realized she wasn’t going south to register voters. Instead, she took local action.

“A friend of mine and I went around and collected canned goods for people who went south to register voters,” Byers said. “My parents were very supportive of those efforts to help on the community level.”

From the July 2017 NASW News. Read the full story here.