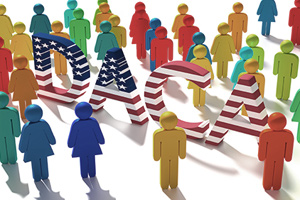 One young woman in her 20s has worked two jobs for the last 10 years as the main breadwinner for her family of five. She soon will graduate from college. Her whole life is here in the U.S. Now she fears being sent away, sent to somewhere she does not know, from the only place she knows as home.

There are many life-impacting stories like this one. They are common because there are 800,000 young people like her, all members of the group brought here as children and promised they could remain in America through an Obama-administration program named Deferred Action for Childhood Arrivals, or DACA.

They are called the Dreamers. This month marks one year since Donald J. Trump lost the popular vote but won the U.S. presidency through an Electoral College victory. During his first year in office, his administration’s policy changes have presented many challenges for the people social workers counsel, coordinate services for or assist in many and diverse areas of their lives.

Some of the main challenges are access to affordable health care, dealing with climate change issues, and immigration and Dreamers — the last of which are now at the top of the list for many social workers, but especially those in border states.

Trump on Sept. 5 ordered an end to the DACA program in six months and said Congress should pass a replacement or it would be phased out as early as March 2018 and deportations could begin.

The impact on DACA and all these issues depends, in part, on what state you practice in, because state legislatures are dealing with the administration’s new and continually changing policies in different ways.

The state’s 120 legislators have been “really active on immigration and health care this year,” she said. “What they’re trying to do is not protect what the (Trump) administration is doing. It’s a very progressive legislature.”

From the November 2017 NASW News. Read the full article here.