Monday, Oct 11th is National Coming Out Day – a day that honors the enduring advocacy and resiliency of LGBTQIA+ people and communities.

First celebrated in the U.S. in 1988, National Coming Out Day emerged in stark contrast to the overtly homophobic and transphobic social and political climate of the time. By 1988, the AIDS epidemic had claimed countless LGBTQIA+ lives in large part because of its framing as a highly stigmatized “gay disease.” LGBTQIA+ families and communities were simultaneously denied civil and legal protections and were left to provide mutual aid to one another throughout the course of the AIDS epidemic. 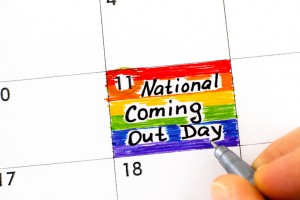 National Coming Out Day’s founders Robert Eichberg and Jean O’Leary aspired to create a day of awareness and celebration that centered the significance of “coming out” and “being visible” as essential forms of activism. In 1993, Robert Eichberg said, “Most people think they don’t know anyone gay or lesbian, and in fact, everybody does. It is imperative that we come out and let people know who we are and disabuse them of their fears and stereotypes.” For many coming out is akin to claiming one’s truth in public, and coming out today is more possible because of the powerful legacy of LGBTQIA+ civil rights activism.

Despite the progress made on behalf of LGBTQIA+ people, stigma, homophobia, bi-phobia, transphobia etc., persist. Consequently, it may not be safe for everyone to come out. For some, coming out may result in estrangement, hardship, and compromised safety. National Coming Out Day is an opportunity to both celebrate those who are able to declare their truth in public and is also a call to action for allies who may be in a position to hear and to meet someone’s truth with affirmation and compassion.

For information, resources, or support with the coming out process please visit these resources: