NASW held a daylong leadership forum in October to culminate the association’s 60th anniversary celebration in 2015, and to discuss ways NASW and its partners can address important issues and advance significant initiatives within the social work profession. 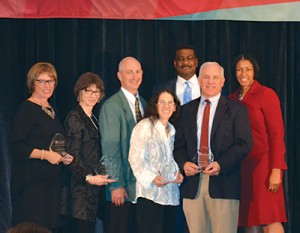 NASW CEO Angelo McClain said the social work profession has much to celebrate and to be proud of. The forum, he said, offered the chance to reflect on how NASW has helped pave the way for positive change in society since 1955.

“It challenges leaders in the field to discuss how social workers can have the greatest impact on serving our nation’s families, helping achieve critical justice goals, and understanding the ethical implications of seismic changes in technology and globalization over the last decade,” McClain said.

Social work leaders, students and faculty from across the U.S. attended the conference, where they heard panel presentations that focused on family well-being; liberty and equity; and emerging issues regarding the Code of Ethics.

Social workers have made a difference in the lives of millions of people for more than a century, NASW President Darrell Wheeler said in his opening remarks.

He added that the panels’ goals were to explore the serious questions of today and challenge attendees to think deeply and from the heart.

“Our moderators and speakers represent many different facets of our professional community and the NASW family,” Wheeler said.

The first panel, “Family Well-Being Across the Lifespan,” was moderated by NASW member and Howard University professor Tricia Bent-Goodley. The panel addressed the increasingly complex continuum of services needed to serve individuals and families at all stages, Wheeler said.

From the January 2016 NASW News. NASW members can read the full story here.