Participatory Investigation of the Great East Japan Disaster: PhotoVoice from Women Affected by the Calamity 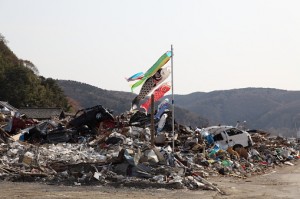 Disasters exacerbate pre-disaster inequities and intensify the vulnerability of women and other marginalized and disempowered groups. Thus, disaster policies and responses should incorporate the experiences and perspectives of those who are marginalized. A recent issue of the journal Social Work included an article by two Japanese researchers on using an interactive, collaborative technique to highlight women’s experiences of disaster and recovery.

At 2:46 local time on March 11, 2011, a 9.0-magnitude earthquake struck the northeast region of Japan, which triggered one of the most devastating tsunamis in recorded history and caused massive destruction to the natural and built environment. Over 122,000 houses were destroyed, and many more were partially destroyed or submerged. Nuclear meltdowns and hydrogen explosions at the Fukushima Daiichi Nuclear Power Plant, located about 110 miles southwest of the earthquake’s epicenter, released a high dose of radioactive material, the effects of which are ongoing. The accident was rated a level 7, the highest on the International Nuclear Event Scale. This combined natural and technological disaster led to the evacuation of many residents; at its height, over 470,000 people were displaced. More than 119,000 individuals were still living in exile six years later, the majority from Fukushima. The disaster took the lives of 15,893 individuals, and over 2,500 people remain missing. The disaster continues to affect people’s lives to this day. An additional 3,523 deaths were recognized by the government as related to the disaster.

As a nation that experiences many disasters, including earthquakes, typhoons, volcanic eruptions, and heavy snowstorms, Japan has a strong government-centered disaster prevention and response system. However, women’s experiences and perspectives have not been adequately reflected in disaster responses and policies in Japan. Prior to the Great East Japan Disaster, the major policies on disaster—the Disaster Countermeasures Basic Act and the Basic Disaster Management Plan—made limited reference to gender. The scant attention to gender is not limited to the policy level. Although many studies have been conducted to examine and document the consequences of various major disasters in Japan, only a small number have focused on women’s experience of the disasters. Few, if any, have used participatory methods of investigation to capture women’s lived experiences and perspectives to inform the development of disaster policies and programs that are more socio-culturally responsive to their conditions and needs.

Addressing these gaps in policy and research is urgently needed. Major disasters exacerbate pre-disaster inequities and intensify the vulnerability of women and other marginalized and disempowered groups. Thus, disaster policies and responses should incorporate the experiences and perspectives of those who are marginalized. The authors sought to conduct a research project to help develop more inclusive, gender-informed disaster responses and policies. Participatory action research methods would enable us to obtain empirical data that reflect the perspectives of disaster victims, especially women. Using PhotoVoice methodology, they worked with groups of women affected by the disaster to investigate the consequences of the disaster on their lives.

PhotoVoice involves a series of group meetings, in which participants share photographs they have taken and discuss the issues important to their lives and communities. At group meetings, selected photographs are projected or otherwise shown to meeting participants to guide discussion. In general, participants create voices (that is, short written texts) to accompany the selected photographs. Dissemination can occur through any print or digital format, and exhibits may be mounted in community venues. Beyond its frequent use in health promotion and health-related research, PhotoVoice has been used in a wide range of fields, such as labor studies; studies of immigrants and refugees; community development; and education, including social work training.

Right after the Great East Japan Disaster, concerned with the welfare and rights of women and other marginalized individuals, the first author, a Japan-born, U.S.-trained social work practitioner–educator–researcher, contacted several professionals and activists in Japan, including the second author, to explore possible action. A series of discussions led to the establishment of a national network aimed at promoting gender-informed disaster response, the first of its kind in Japan. After working with various NGOs and other disaster recovery groups, the authors decided to pursue a participatory investigation to illuminate the experiences of women disaster survivors. The authors recruited several women, ages from mid-30s to 70s, and provided them with cameras to document their environment post-disaster.

The authors make several interesting observations about the participatory investigative process in the aftermath of the Great East Japan Disaster. For instance, the women recruits sometimes said they felt guilty of being voyeuristic or exploiting the disaster. The authors themselves report needing to proceed slowly because although they themselves are Japanese, they were from a different part of Japan, and were viewed as outsiders. Of course, the authors report that they themselves, as well as the women participants, experienced many of the post-disaster hardships, including transportation, finding meeting space, etc.

Nevertheless, the authors report that using the PhotoVoice method helped illuminate the particular experiences of the women in the disaster aftermath, and that the insights gained are valuable. In addition, it was worthwhile to see the PhotoVoice method in practice. PhotoVoice recognizes those who are affected by the social issue under investigation as experts and values their experiences as valid and prime sources of knowledge. Not only do participants produce empirical data (that is, photographs and group discussion narratives), but they also engage in data analysis collectively and may do so in repeated group discussions on an ongoing basis. Participants themselves further engage in the dissemination of such knowledge, which in turn informs policymakers, practitioners, and the citizens at large. The challenges are numerous, but participatory action research captures the often-neglected experiences and perspectives of women and other marginalized groups and inserts them into public discourse on important social issues.