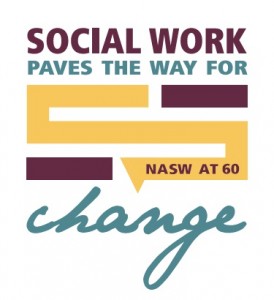 The National Association of Social Workers (NASW) today launched its celebration of National Social Work Month in March and the 60th anniversary of the association with activities that highlight this year’s theme, “Social Work Paves the Way for Change.”

“The social work profession and the National Association of Social Workers have helped bring about major positive changes in American society over the past six decades,” said NASW CEO Angelo McClain, PhD, LICSW. “Social workers advocated for the creation of programs such as Medicare and Medicaid to provide health care to vulnerable populations such as the elderly and the poor, voting rights for all Americans, and equal rights for African Americans, women, and people who are lesbian, gay, bisexual or transgender. Simply put, social workers have helped transform our society, playing major roles in many societal advances that we now take for granted.”

There are 650,000 social workers in the United States who serve 10 million clients a day. NASW and its 55 Chapters support members of the helping profession by ensuring they follow consistent practice standards, complete advanced professional training, participate in grassroots issues advocacy and develop organizational leadership skills.

“Throughout Social Work Month and our 60th Anniversary year, NASW will host events and provide resources that honor the many contributions of these unsung heroes,” said McClain.

To find some of the leading minds in social work for interviews during Social Work Month visit NASW’s 1,000 Experts Campaign. For more information about March activities, visit www.socialworkmonth.org.