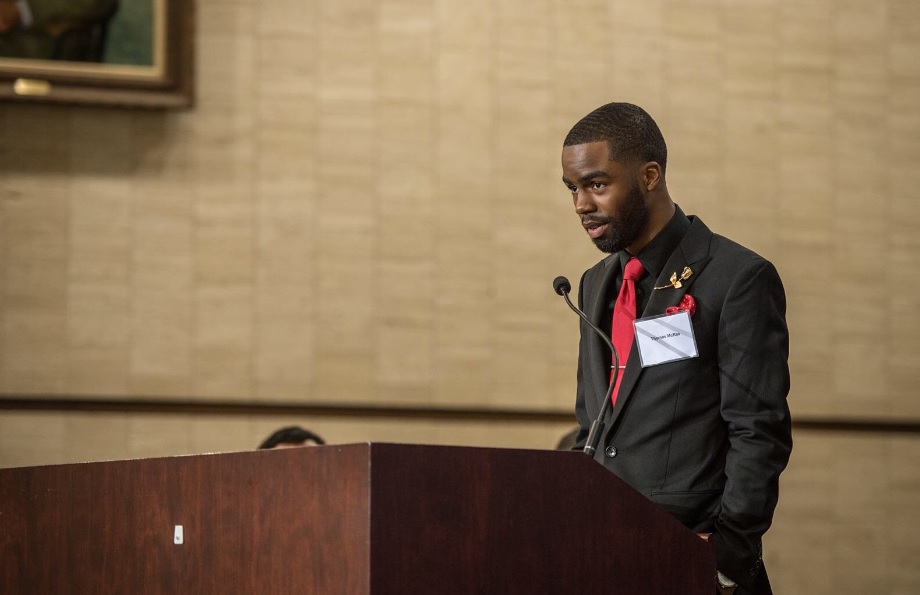 Former foster child Thomas McRae was adopted as a teenager. McRae now plans to become a social worker and  does public speaking to tell his story and inspire others.

The U.S. Department of Health and Human Services’ Administration on Children and Families is commemorating National Adoption Awareness Month in November with the campaign, “We Never Outgrow the Need for Family.”

Thomas McRae, a senior psychology major at Cheyney University of Pennsylvania, knows how true these words are.

McRae’s mother was absent and his father had difficulty raising him alone so he placed Thomas in a series of friend’s homes in the Washington, D.C. area. Thomas was injured by gunfire while sleeping on a couch in one of those homes. As a result authorities placed him in foster care.

Thomas ended up moving from foster home to foster home, often because his anger made him disruptive. At one point he was even put in a hospital psychiatric ward. However, Thomas never gave up hope of finding a permanent family.

“I entered the foster care system in 2004 and had just turned 11,” he said. “I had longed for a permanent family – if just a single Mom or Dad.”

Thomas also was a guest on a radio station and attended holiday parties designed to connect children to potential adoptive parents.

It was a friendship with sixth-grade playmate Dawson Hylton that unexpectedly led to Thomas finding a new family. The two friends bonded over a common interest in wrestling and Thomas was soon a frequent guest at the home of Dawson and his mother Joi Morris, who lives in Forestville, Md.

“Whenever I came to his house I told him I wished my foster parent was like his Mom,” Thomas said.

When Thomas reached the age of 16, he realized he would soon age out of foster care without family connections. 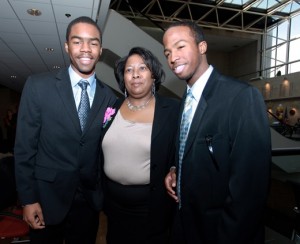 There are more than 400,000 children in foster care in the United States this year and one out of four is waiting for an adoptive home. More than 23,000 children aged out of the foster care system last year without finding “forever families.”

“I called and asked (Dawson’s) Mom if she could adopt me,” Thomas said. Joi Morris said she would at least consider it.

Thomas went into a group home for six months. During this time Joi Morris decided to adopt him and took the training classes she needed to do so. She formally adopted Thomas on Nov. 22, 2010 when he was 17 years old.

Thomas will graduate in a few weeks with a major in psychology. He also plans to pursue a degree in social work to help others. He already does public speaking to tell others about his experiences and educate the public about foster care and adoption.

He is looking forward to spending the holidays with his adoptive family.

“People take things for granted. When you think about how many youth in foster care don’t have families. The holidays are a hard time for them. They don’t have anywhere to go.”

“I am just blessed to have a family I can come home to,” he said.

Macro Perspectives on Youths Aging Out of Foster Care

The Children’s Bureau: Shaping a Century of Child Welfare Practices, Programs, and Policies

How to Screen Adoptive and Foster Parent: A Workbook for Professionals and Students