Statement: NASW opposes confirmation of Rep. Tom Price to be Secretary of Health and Human Services 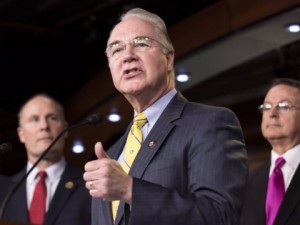 The National Association of Social Workers (NASW) opposes the Senate confirmation of Rep. Tom Price (R-GA) to become Secretary of the Department of Health and Human Services (HHS) over concerns he will erode health care protections for millions of Americans and support efforts to repeal the Affordable Care Act.

HHS is one of the most important federal agencies that oversees social safety net programs, including child welfare, Social Security, Medicare, Medicaid, and food and drug safety. The agency affects the health and well-being of millions of Americans.  That is why it is important to examine the qualifications, ideology and record of the HHS secretary.

Price, who is an orthopedic surgeon, has an abysmal record when it comes to ensuring all Americans have access to quality health care. NASW believes he is not qualified to become the next leader of HHS.

NASW also supports the Affordable Care Act (ACA), which has provided health care coverage to millions of previously uninsured Americans, and wants Congress to work on legislation to strengthen and improve ACA.

Price has been a vocal critic of health care reform and has been one of the most outspoken advocates in the U.S. House of Representatives for repealing ACA.  A demonstration of Price’s antipathy toward health care coverage for all citizens is his proposal to replace a ban on insurers who deny coverage for people with pre-existing conditions with a provision requiring continuous coverage for the previous 18 months.

This proposal would open a loophole that ignores people who lose existing coverage when they are unemployed. It also creates a loophole for those who are forced to change insurance coverage due to rapidly escalating premium costs or being dropped by their insurer.

Price has an established Congressional voting record of supporting policies that would severely damage health care protections and progress that has been made in improving the health of Americans. In his push to dismantle ACA, Price proposes replacing it with the Empowering Patients First Act—a plan that could leave 21 million Americans currently insured under ACA without coverage.

Price was an architect of the Republican budget that would end the Medicare guarantee to senior citizens and transform it into a voucher program.  He is also a leading advocate for overhauling and privatizing Medicare and has said Medicare privatization is his top priority.

The confirmation of Price would put the nation on a direct path to end Medicare as we know it, raising health care costs and more importantly breaking a fundamental promise to provide health care coverage to Americans who are older.

Price fully supports block granting Medicaid programs. This would divert federal funds that millions of low-income single adults depend upon into more uncertain state grants. Converting Medicaid into block grants would also give some states an excuse to sharply cut spending on care for people who are indigent or drastically reduce patient services.

Beyond Price’s positions on the ACA, Medicaid and Medicare, here are other reasons NASW opposes his confirmation:

– Denial of non-emergency treatment for those who lack funds to meet Medicare co-payments;

– Voting against expanding research on embryonic stem cell research; and

It is our opinion that the incoming HHS Secretary should focus on immediate concerns of strengthening our child welfare system, improving public health, addressing the gaps in mental health and substance use disorder research and programs, and making our food and drugs safe for consumption.

With the many medical, behavioral health, public health and social services challenges confronting the United States, the nation needs an HHS secretary to help guide us toward sustainable resolution of these challenges. For example, instead of making the repeal of ACA an immediate priority, Price should focus on reversing the disturbing trend that life expectancy in the United States has declined for the first time in 23 years.

It appears that Price’s ideology holds a position that views health care as a commodity. The implication is that quality health care is accessible to only those who can afford it. This position is contrary to that held by most physicians. Most of the public and even the publicly stated positions of President-elect Donald Trump.

NASW finds this nomination to be troubling. It is important to mention that the Senate is under no obligation to confirm a nominee whose policy views are so outside the mainstream and opposed by a clear majority of Americans, including the President-elect who campaigned on a pledge to not cut Medicare or Social Security.

Social workers represent a significant part of America’s health and human services workforce. We do not take that fact lightly.  One of the profession’s basic and fundamental values – from its inception – is to advocate for the well-being of the of the country’s most vulnerable citizens.

Therefore, we insist that HHS be led by someone who is fully committed to re-affirm the department’s mission of protecting health and providing essential human services to Americans.

The National Association of Social Worker is part of coalitions that are working to stop Price’s confirmation. We are also urging our members and the larger social work community to contact their senators to oppose the confirmation. For more information contact NASW Social Justice and Human Rights Manager Mel Wilson at mwilson.nasw@socialworkers.org.