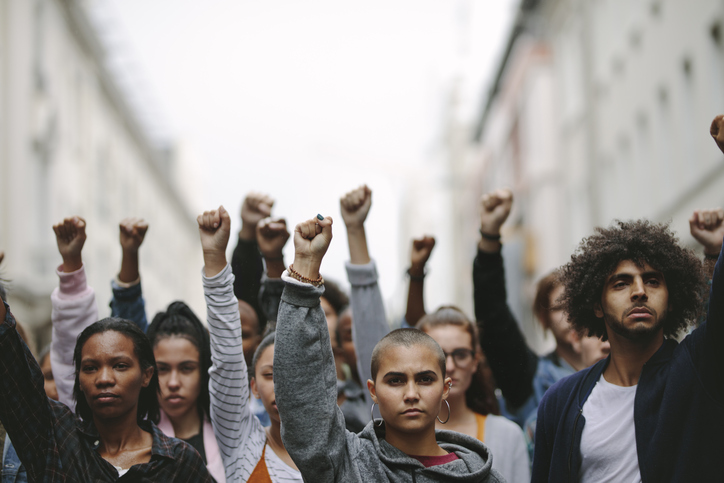 The National Association of Social Workers (NASW) and its Minnesota Chapter issued statements reacting to the murder of unarmed African American George Floyd at the hands of police in Minneapolis on May 25. His death has led to massive protests around the nation and spurred a renewed call to end racism in our society.

Other NASW Chapters are weighing in on this issue. Take time to read their perspectives.

Social workers can raise the questions at every level they are involved with. If you are in contact with law enforcement or can get in contact with law enforcement, open the discussion with the goal of fighting racism and promoting social justice. Because we are professional social workers we can guide and influence the effort towards education and policy reform. COVID has taken our attention but we have not forgotten racism is ever present and we need to and can do something about it.

What we are witnessing this week, is the cumulative impact of #Ahmaud Arbery,#Breonna Taylor,#Sean Reed,#Sandra Bland,#Philando Castile, #Eric Garner,#Michael Brown,#Emmett Till and so many other whose names and humanity never made it to become a hashtag.

The incidents that have occurred over the past week are disturbing and all too familiar in Indiana and across the United States. This is not new. Racism and police brutality are real. There is so much hate and inequality in our world, and we should not stand by. Being sad and outraged is not enough, we must do better. We must join this fight. When people come together, change can happen.

Social workers are a profession called to action, it is rooted in our education, our Code of Ethics and ingrained in who we are. We are called to fight for social justice, and we do so, daily. We must not stand by as the pain, trauma, and voices of our neighbors and communities go unheard. We must do better.

Racial justice begins when policies and practices empower economic, voting, social, diversity and multicultural education, health care and environmental justice. We must support the protesters’ call for change in police policies that are reasonable, well thought out, and promote greater transparency and accountability on the part of law enforcement across Kentucky. We must examine racism and microaggressions in every profession, place of worship, community agencies and in our own homes.  And we will use our votes for leadership that will fight against systemic racism and for equity and inclusion!

We continue to witness the brutal murder of Black men and women through police brutality. Although it is not the actions of all police, it is systemic through the criminal justice system. We must stop the systemic racism that plagues our country. We cannot sit idly by.

Over the past few months, we have been inundated with constant reminders that black lives still do not matter in today’s society. The reductive quantification of black lives continues to happen in various facets and we are reminded that black death is America’s foundation.

NASW-NE is here to support, as always, the social workers that will work tirelessly for this cause. We are here to help educate, to help advocate, and to provide hope. We stand with you and with those who face this oppression, trauma and grief.

Social Workers: I invite all social workers to stand above the violence, historical and institutional racism that works to divide not unite us as a human race. Make progress through peace, civil disobedience and policy change. Be thoughtful and conscientious of how we can peacefully and powerfully effect change in policy and justice that honors race, ethnicity, sex and gender minorities.

We should ask ourselves why we somehow find the statement Black Lives Matter (BLM) offensive, often responding that “all lives matter”. The glossing over and erasure of the importance of the BLM movement is racist, oppressive, harmful, and invalidating. The fact remains that the very reason this movement was created was because our society, and the ongoing violence against Black people necessitated the declaration that BLACK lives DO INDEED matter!

We chose social work instead of another helping profession because of our professional value of social justice. Racial justice should be at the heart of social work practice. Racism is America’s defining social problem. By not acknowledging and addressing this, social workers are ignoring their ethical obligation. Now is the time to let our voices be heard, we cannot sit idly by as acts of racism, hatred, violence, and murder are repeatedly targeted toward black and brown people in our society. Silence is not an option and expressions of outrage and dismay are not enough.

As social workers we are duty bound to fight for the dignity and worth of all individuals, to act in service of all who are facing challenges in our communities, and to fight, as leaders, for social justice. We must, and will, stand with all of our human brothers and sisters in this fight.

As the primary source of expertise on social work values and ethics in Ohio, NASW Ohio wishes to uplift and support the systemic solutions proposed by the broad-based Movement for Black Lives. These demands include transformative shifts toward community oversight, accountability of law enforcement, and divestment from militarized and “broken windows” policing tactics that fail to meet basic human needs paired with dramatic investment in health, housing, safety, and education.

“After centuries of systemic oppression, the pressures of living in a constant state of fear have now reached a collective breaking point, resulting in a collective demand for change. The indiscriminate deployment of weapons against people of color has shocked the consciousness, and inspired people from all walks of life to come together and say, in unison: ENOUGH.”

The degradation of African American citizens, the dismissal of the peoples’ voice, and the disregard for the value of human life that are crippling our communities must be addressed. The murder of George Floyd and so many before him whose lives were taken because of the color of their skin is an unacceptable trend that we must all work together to put an end to.

Now is not the time to condemn the protests but to listen to the message at their core: America’s leaders are not addressing racism in this country.  Martin Luther King Jr. proclaimed that “a riot is the language of the unheard,” and these violent protests are manifestations of internalized racial oppression/ inferiority.  When a people gets tired of not being seen, not being heard, not having their lives matter, they find ways to be seen and heard by exaggerating their visibility.

Visit the NASW Ethnicity and Race webpage for resources social workers can use to address racism and inequity in our society.