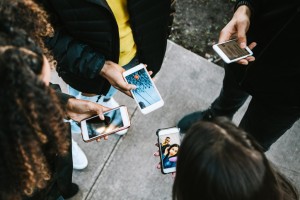 Mahanoy Area School District v. B. L., involves the scope of a public-school student’s First Amendment right to free speech that occurs on social media or off campus and the school’s ability to address off-campus speech. The issue of whether public schools can discipline students over something they say off campus is especially significant in the modern age of the Internet and social media, with an awareness of the harmful effects of online bullying, and during a time of remote learning due to the COVID-19 pandemic.

In March 2021, the National Association of Social Workers (NASW) and more than 30 other organizations participated in the Mahanoy Area School District  v. B.L. amicus brief, led by the National Women’s Law Center, Lambda Legal, and the Lawyers’ Committee for Civil Rights Under Law, that was filed in the U.S. Supreme Court.

In Mahanoy,  a 14-year-old ninth grade cheerleader (B.L.), was suspended from the school’s cheerleading team for a year after being chosen for the junior varsity team instead of varsity team and posting a picture on her personal Snapchat account with the caption “f*** school,  f*** cheer, f*** everything.” The Snap was posted off-campus, on a weekend, from the student’s personal account and did not contain any threats, harassment, or mention her school or any students.

Another teammate, who was the cheerleading coach’s daughter, took a screenshot of the Snap and showed it to her mother which resulted in B.L. being suspended. B.L.’s parents challenged the suspension in court and sued the school district for violating B.L.’s First Amendment rights. The parents argued that the school district did not have the right to discipline B.L. for her off campus speech. The District Court for the Middle District of Pennsylvania and the Court of Appeals for the Third Circuit agreed and ruled that the school violated B.L.’s free speech rights by punishing her for the Snap since the school could only punish B.L. for speech on campus or at school-sponsored activities. The school district appealed to the Supreme Court.   Oral arguments were scheduled for April 28, 2021.

Our amicus brief was filed in support of the high school student, B.L., and it asked the court to create a standard that does not prevent schools from responding to off-campus speech that invades a student’s right to be safe and to access equal educational opportunity, while also making clear that certain student off-campus speech, such as student activism, remains protected under the First Amendment.

It emphasized the importance of preserving schools’ ability to address legitimately harmful speech, such as bullying, harassment, and threats of violence, whether or not it occurs on school grounds, but it also underscored the fact that school districts must be very specific and distinct with their actions to not overextend their authority. If the Supreme Court rules that school districts can regulate student’s speech off-campus in very broad terms, this could also hinder student activism, student protests, and other speech that may be perceived as merely disruptive to the school.

Our brief also cited substantial research that showed how such a ruling is critical for protecting girls, LGBTQ-plus students, students of color, students with disabilities and other students from historically marginalized groups. It also accounted for the potential implications of a ruling that could further increase biased discipline rates for Black students and other students from historically marginalized groups who are disproportionately targeted for discipline by schools.