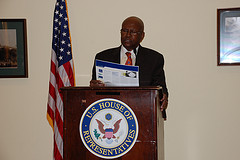 On Tuesday evening, members of the Congressional Social Work Caucus (CSWC) came together for a reception hosted in the U.S. House of Representatives Rayburn House Office building. This event featured CSWC chair Rep. Edolphus ‘Ed’ Towns (New York-10) who emphasized the key role of the CSWC and the importance of supporting the Dorothy I. Height and Whitney M. Young, Jr. Social Work Reinvestment Act. Rep. Towns, himself a proud social worker, highlighted that social work skills and leadership are necessary in all corners of the country, including Congress, to solve society’s biggest challenges. Rep. Towns presented NASW Executive Director Elizabeth J. Clark with a congressional record as he recognized Clark and NASW for their services to the social work profession. Rep. Towns said. “The social work profession is so important…thank you NASW for all of your help.”

The CSWC is an authorized Congressional Member Organization. For more information on the CSWC event, please see the May issue of NASW News. Follow the CSWC @socworkcaucus.