October is Domestic Violence Awareness Month: Here’s What You Should Know

In October 1987, the first Domestic Violence Awareness month was observed. Two years later, Congress passed a law making it official.
Domestic Violence, a preventable, global and domestic public health problem, does not discriminate and impacts communities worldwide daily. Regardless of age, economic status, sexual orientation, race, nationality, or religion, domestic violence significantly affects individuals, families, and communities. Even though both men and women are victimized by domestic violence, women are more likely to experience serious physical, if not lethal violence, in their lifetime. According to the National Coalition Against Domestic Violence,  someone is physically abused by an intimate partner every 20 minutes. This means that over 10 million people experience domestic violence each year. Over 85 percent of reported victims are women. 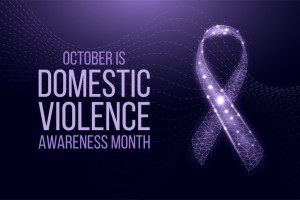 In an interview with University of California, Davis, Clare Cannon, assistant professor of social and environmental justice in the Department of Human Ecology and the lead author of a new study on domestic violence said, “The pandemic, like other kinds of disasters, exacerbates the social and livelihood stresses and circumstances that we know lead to intimate partner violence.” According to the University, “increased social isolation during COVID-19 has created an environment where victims and aggressors, or potential aggressors in a relationship, cannot easily separate themselves from each other. The extra stress also can cause mental health issues, increasing individuals’ perceived stress and reactions to stress through violence and other means.

“Compounding these stressors, those fleeing abuse may not have a place to get away from abusive partners,” Cannon said.

According to data from NNEDV data:

VAWA is reauthorized every five years. These reauthorizations allow Congress to update the law to reflect best practices and to ensure VAWA is effectively meeting the needs of victims and survivors. VAWA has evolved significantly in the past quarter-century. Earlier this year, the House of Representatives passed H.R. 1620, The Violence Against Women Reauthorization Act of 2021-2022 (VAWA), with significant bipartisan support. H.R.1620 is based on extensive outreach to direct service providers, other experts in the field, victims, survivors, and a variety of other stakeholders. In summary, H.R. 1620:

Now, is time for the Senate to introduce a companion bill to build on the Houses H.R. 1620 The Violence Against Women Reauthorization Act of 2021-2022 (VAWA).

Social workers have been critical to responding to domestic violence. We provide supports at all levels of service for victims, families, and perpetrators, including direct support and services to survivors, case management and clinical services to children. We also collaborate with other professionals to ensure the safety and well-being of survivors and their children, engage perpetrators of abuse through evidence-based practices, provide information to organize, mobilize, and educate communities on this issue, craft and promote structural supports through needed policy advocacy and implementation, and conduct important research that informs the field. Social workers have long been important and critical voices in the fight to end domestic violence. As we pay particular attention to domestic violence each October for Domestic Violence Awareness Month, we challenge each social worker to continue to find ways that they can be impactful on this issue. We also bring attention to the critical role social workers play in stopping domestic violence and communities around the nation and around the world.

NASW is proud to be a key advisor to the National Task Force to End Sexual and Domestic Violence (NTF) and work in coalition with allies and partners to advocate for needed legislation, which maintains vital protections for vulnerable survivors, while making essential enhancements to prevent and respond to domestic violence, sexual assault, dating violence, and stalking.

Centers for Disease Control and Prevention