Damon Smith had been suspended from school more than 15 times.
“You start thinking it’s cool,” he said. “You think you’re going to come back to school and catch up, but unless you’re a genius you won’t. It made me want to mess up even more.” 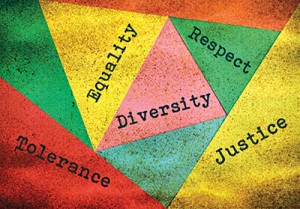 After Ralph J. Bunche High School in Oakland, Calif., expanded the restorative justice program it had been testing, the overall suspension rate dropped from 12 percent to 8 percent from 2011 to 2012, an April 2013 story in The New York Times states.

Smith became an “A” student because of it, saying “I didn’t know how to express emotions with my mouth. I knew how to hit people. I feel I can go to someone now.”

The overuse of suspensions and expulsions hit African-American youths the hardest. And many more Americans lack access to education, affordable housing and jobs due to prejudice, bias and stigmatization.

Social workers are leading the way to address and overcome these problems as they tackle the Grand Challenge for Social Work: Achieve Equal Opportunity and Justice.

Jeremy Goldbach believes the reason for many of society’s social problems is rooted in discrimination and stigma. There are many people, he said, who see homeless people and think “That’s OK. They’re homeless because they don’t work.”

“We have to think about the impact stigma has,” said Goldbach, BA, MSSW, Ph.D., and assistant professor at the Suzanne Dworak-Peck School of Social Work at the University of Southern California in Los Angeles. “All the challenges demand we have to focus on stigma to attain a general sense of equity and equal opportunity.”

Rocio Calvo, BA, MA, Ph.D., and associate professor in the global practice concentration at the Boston College School of Social Work, where she is founder and director of the Latino Leadership Initiative and chair of Diversity & Cross-Cultural Issues at the school, said despite making great progress, the point where everyone has the opportunity to advance has not been reached.

The “epidemic problem” of high suspensions and expulsions of African-American and Hispanic students from schools in every state must be fixed, not only to give these youths a chance to succeed, but also because of the cost to society from them not graduating.

From the March 2018 NASW News. Read the full story here.